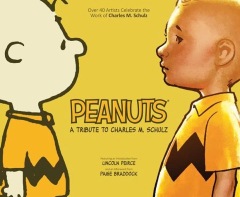 Peanuts: A Tribute to Charles M. Schulz. “Over 40 artists celebrate the work of Charles M. Schulz.” It says so right on the cover. And Tribute is a fine celebration of Peanuts. There are some great cartoonists who contribute pieces for the collection. It’s 144 pages, which means contributors average less than three and a half pages each.

Collections of Peanuts strips, like the Fantagraphics Complete Peanuts, have three strips a page. So Schulz would have ten or eleven strips in similar page count. It shows just how magical he was with pacing those strips day-to-day.

There are some good strips, some okay strips, some cool strips. The Paul Pope Snoopy and Schroeder strip? Very cool. But given the whole grab is Pope doing these realistic looking Pope characters and them still operating on Peanuts logic. When Schroeder worries Lucy’s going to show up… well, Snoopy’s cute and all but I’d much rather see Pope Lucy. Beautiful art, though. Because Pope’s a lover.

There aren’t any strips non-Peanuts loving strips in the book. There are even strips just about loving Peanuts.

Stan Sakai and Julie Fujii do one of the best longer strips in the book, Escapade in Tokyo. Charlie Brown gets separated from the class on a school trip and spends the day with a cool Japanese girl. It’s anti-crap on Charlie Brown (most of the book, if not all of it, is anti-crapping on Charlie Brown) and it’s a nice story. Sakai and Fujii give it just the right amount of nostalgia and sentamentality without sacrificing the humor.

Terry Moore does something similar. Lucy vs. Charlie Brown only this time Charlie Brown’s going to kick that football. Moore mimicks Schulz’s style but sort of not enough to get away with the strip. Charlie Brown winning has to be perfect, like Sakai and Fujii did.

Evan Dorkin and Derek Charm do a “Cthulhu comes to Peanuts” long strip and it’s inventive, beautifully illustrated (the style homage ages like Schulz’s did as the strip goes on), and kind of thin. Not many contributors do a riff on Peanuts without staying in Schulz’s constraints.

Except then there’s Melanie Gillman’s beautiful Marcie strip addressing her relationship with Patty. Liz Prince had a nice Patty strip earlier, but nowhere near as ambitious. Shaenon K. Garrity’s long, color strip about Patty taking on Lucy is good. It’s mostly in Peanuts constraints, just with some visual storytelling differences.

Peanuts: A Tribute is a good book for a Peanuts fan. To check out from the library. It’s a great proof of concept for a more ambitious project. I didn’t realize I wanted other cartoonists doing Peanuts until I read it. But I want them doing more, trying harder.

I also wish, given it just being this assortment of homages, Boom! had printed it more coffee table size.