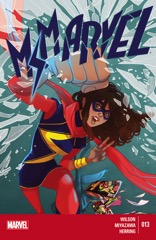 Takeshi Miyazawa’s art changes Ms. Marvel. Along with the family emphasis this issue–Kamala spending time with them instead of her friends at school–it nearly feels like a different comic. Miyazawa is action-oriented and less detailed than the comic’s usual artists; the experience is different.

Even Wilson’s writing feels a little different, as she’s telling a story about Kamala having a crush on an older guy from her perspective (complete with her family being concerned).

Not to mention there are now so many Inhumans everywhere it’s like Marvel got worried about “The Flash” TV show being able to create a new supervillain every week and had to do the same thing themselves.

Unfortunately, that aspect of the comic–the big, somewhat boring supervillain fight–is where Wilson loses track of her story. The texture is gone. It’s a fine issue, it just ends a little out of step.