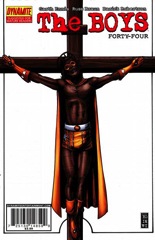 I was going to comment on how different Robertson’s art looks, but it’s Russ Braun, not Robertson.

Braun does a good job too, except Tony Avina’s colors do way too much, putting in cheekbones and the like.

Ennis finally has a go at religion this time–corporate “700 Club” type religion, with some Scientology digs thrown in, all tied into the superhero thing. It’s a funny opening sequence, then it turns into a plot point for Annie.

Meanwhile, there’s tension between Mother’s Milk and Butcher, Hughie in the dark about some things, Annie deciding he shouldn’t be in the dark… Not to mention the Homelander apparently on the way to a meltdown.

It’s a fast read, but a full issue. Instead of putting things off, Ennis finally seems ready to move ahead with his long gestating plots. Maybe having Braun on the book got him moving.