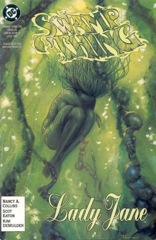 Bad news, good news. Eaton’s the regular penciller. In addition to Tefé’s undocumented nanny, Lady Jane, not having a nose, none of the other female characters seem to have much of one either. Certainly not enough to make their faces three dimensional.

Good news is Collins can write, which I already knew, but she choses to do so here. She tells Lady Jane’s origin story and she does it a lot better than the rest of the issue. It’s an unhappy story of early industrial age England, told from a woman’s perspective; it’s excellent.

The stuff with Alec being unsympathetic to Abby? Not excellent. Collins skips establishing Alec approving of Lady Jane as a nanny so his position on the matter makes no sense.

It’s only a few pages in the issue, but enough to show–juxtaposed against the Lady Jane origin–where Collins’s storytelling interests lie.