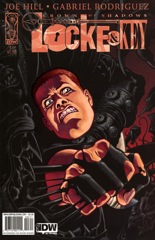 So the sister’s name is Kinsey. The mom’s name, I don’t know. I also don’t know the cop’s name. I don’t really remember him or why he’s important. Hill just introduced two new characters to the supporting cast–Kinsey’s male friends from the near death experience–yet he brings back the cop.

Locke & Key has become one of those comics in need of a cast list at the start of the issue. Maybe even some major event recap notes too. It’s hard to believe anyone can read this series as published–with time off between not just issues but miniseries–and follow it.

Besides being aggravating, the issue’s okay. It’s a bridge issue, getting the mom out of the house, establishing the revised supporting cast, giving Dodge something evil to do.

There’s a good hard cliffhanger. Rodriguez does great on all the talking heads scenes. So, confusing but still good.