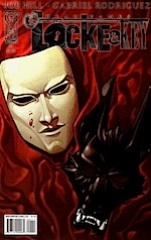 I really wish this issue had a better colorist. Well, I guess Jay Fotos isn’t bad overall, he just doesn’t seem comfortable making the lead character, who’s black, have black skin. Instead it’s a shiny tan; the guy looks like Tyrone Power. There are a bunch of puzzling lines about race until halfway through, when he says he’s black.

For the first issue of the second series, Joe Hill does an “intermission.” He introduces the protagonist, a teacher at the local high school, who figures out something’s going on when he sees the bad guy. It’s been a while since I’ve read Locke & Key and the brief recap doesn’t cut it, so it was an uphill read.

The regular cast doesn’t even appear. It’s a texture issue and a good one. Hill does a fine job with the protagonist. The issue’s engaging and unsettling.