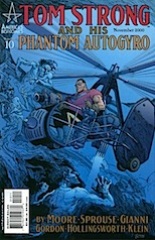 Moore closes the issue with a joke ad for the comic line and it overshadows the rest of the issue. It’s just too funny.

Once again, there are three stories. The first, illustrated by Gary Gianni, is sort of a period horror thing. Tom gets on a time machine-like device and travels into the past–into a dimension of the dead. Gianni’s art is sufficiently creepy, illustrating Moore’s prose. It’s a very effective piece, giving real insight into the Tom Strong character.

In the second story–Sprouse and Gordon taking over–Tom visits an alternate universe much like a Disney cartoon. It’s funny, cute and somewhat unexpected from Moore.

Fun’s also the keyword for Tesla’s adventure. She inadvertently brings a much of alternate selfs through a dimensional portal.

The issue’s not deep, but quite a fun read.