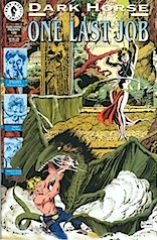 The Gully story from Schultz and Williamson doesn’t have much of a script; with Williamson’s art, who cares about the writing? It’s some otherworldly sci-fi Western thing. Lovely to look at.

White and Snejbjerg’s The Lords of Misrule is a little confusing, but decent. Snejbjerg does a great job with the tone and the art is excellent… he just doesn’t take the time to design it to fit the layers of White’s script. Still, creepy and solid.

Trout’s becoming a new favorite, even though this installment shows Nixey has some peculiar problems with perspective. Lot of charm to it though, very nice characterizations.

Hectic Planet goes on forever here. Dorkin has a bunch of silly sci-fi elements in what should be a human story. It gets tiring after the first page then goes on forever.

Schreck, Rich and Jones have a one page closer. Great art from Jones.