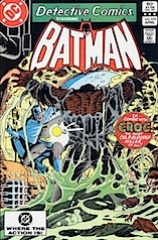 I’m curious to see Conway’s original script–he includes expository scene after expository scene, all the fill in space–and there only good scene is incomplete. Bruce breaks it off with Vicki by acting like a thoughtless ass, but it’s never made clear if he’s really just being an ass or if it’s to get rid of her.

The Killer Croc stuff is also a problem… Batman’s convinced his subconscious keeps letting Croc win. His suspicion is based on Croc letting him escape from the Squid’s gang–Batman thinks he can’t let himself take Croc in.

Apparently, Croc being a savage murderer doesn’t bother Batman in this circumstance.

Jurgen’s has some good layouts–his Batman is weak–and the art’s passable superhero stuff.