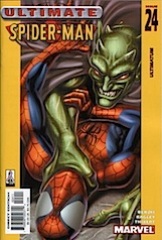 Another half on, half off issue. Bendis writes this great scene between Peter and Nick Fury (Ultimate Nick Fury should definitely go undercover in a high school in a Bendis written series, it’d be hilarious), but then he skips out on finishing it.

He’s then got a way too fast scene between Peter and Aunt May; he uses it to resolve a situation he creates at the beginning of the scene, making the whole thing pointless. Lazy…

And when he does get to Peter’s internal dialogue, it’s fine enough, but it’s a lot of words, killing pages until Bendis has a full enough issue to get to his cliffhanger–the Goblin grabbing Mary Jane.

Also funny–as in not right funny, not ha ha–is Peter’s conversation with the Goblin. It’s like Bendis knows the Goblin isn’t a strong villain either. He’s basically just nuts. There’s nothing else to him.