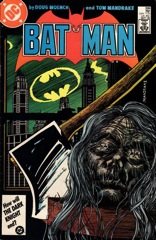 It’s a depressing issue, but Moench’s ambitious in that depression. He plays some of the thriller scenes like a melodrama–a guy storming over to have it out with the murderer of his girlfriend–while having Batman moon over Catwoman.

Most interesting is the scene where Bruce Wayne, cowl off, calls Catwoman on the phone and comes off desperate. Moench’s trying real hard at it.

He doesn’t make it. Not with that scene, not with the two or three breakup scenes in the rest of the issue, but he tries real hard. It’s too bad because it feels like Moench doing a course correction for the series, which had toyed with bringing a female compatriot in for the boys.

Sadly, no, Moench just wasted months hinting at it.

As his run winds down, there’s not much left for him to resolve. Batman’s going from pre to post-Crisis very quietly. 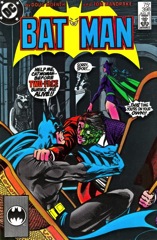 Moench finally starts dealing with some things this issue–Jason finally stops being such a little turd and Catwoman finally stops letting Batman treat her like half a partner. There’s a big showdown between Batman and Catwoman; what’s unspoken is how Bruce Wayne figures in. Batman gets to know Selina’s life, she doesn’t get to know (or share) his. It’s a good scene.

The Two-Face story comes to an end with an intricate plan from Batman to capture Harvey. Except, in this plan, there’s very little interaction between them during the majority of the issue. They have a showdown. Until then, it’s sort of goofy because Batman and Catwoman are following him through Gotham on motorcycles. Mandrake draws Batman’s figure odd, so it reminds a little too much of the TV show.

Speaking of Mandrake, some of his figures are really rough, but his Catwoman pages are absolutely phenomenal. 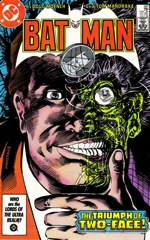 Mandrake draws Two-Face’s head a little wide–probably to give himself room–but otherwise his art has gotten rather refined. There are some excellent panels this issue; Mandrake is able to do the more outlandish superhero ones too, which is nice. Moench doesn’t write many of them, but they’re there.

Speaking of Moench, he’s trying things again. While he’s again reduced Robin to whining about Catwoman, there is a whole subplot about Circe. She’s the model with the burned face; she’s stripping–in mask–to make ends meet. Catwoman has a reaction to it. Moench doesn’t seem to get having Catwoman, in scant garb, considered about the objectification of women is a little off, but it’s an honest response from her at least. Just problematic.

Moench’s focus on her in the supporting cast has reduced Gordon to background. Even Bullock gets a courting subplot.

Robin is such a little punk this issue Gordon finally yells at him. Moench has given up on Bruce Wayne and Jason Todd the past few issues–given up on any Robin characterization besides him being impertinent–but it doesn’t actually hurt the comic much. Moench wasn’t good at the regular people stuff anyway.

Mandrake’s art has a lot of energy. I love the work he puts in on expressions, whether they’re full panel or just a medium shot.

This issue finishes the “Film Freak” story–probably the worst of Moench’s villains and most of them are so terrible, being worst is an accomplishment (the Night-Slayer was a doozy). There’s a lot of action, a tight pace, a surprise third act… right after a surprise in the second. Moench’s on his plotting game at least.

It took him too long to find the partner dynamics he could write well.

Moench tries for way too much this issue. First, he’s got a new villain for Batman to deal with, then he’s got Batman and Catwoman smooching at the Bat-signal. Robin’s jealous so he teams up with Harvey Bullock. So both teams are investigating, Robin’s being nasty to Catwoman, but then it all turns out it’s a Hitchcock homage with Vicki and Julia.

Any number of those items could fuel its own issue–or easily half issue–but Moench throws them all in here. Oh, I forgot his lame, film-quoting villain. Moench overstuffs the issue; it comes as a surprise even, which is a plus. At first, it seems like Julia and Vicki are around as filler for a scene, not the protagonists of the cliffhanger.

Another problem is Mandrake. He’s too loose this issue, his figures too exaggerated. Hurried might be all right, but the art seems rushed.

I’m not sure how I feel about Jan Duursema inking Mandrake. Somehow the vibrancy of the art is gone; the action scenes feel static. Maybe the best sequence is a car accident, just because of the motion has to be included.

That quibble aside, it’s a genial issue. Batman and Catwoman–she’s a vigilante now, much to Bullock’s chagrin–spend a night on the town. It’s supposed to be romantic, but they end up having to fight crime. Moench doesn’t get the tone deafness of it–they have a cute banter scene, are about to kiss, have to stop and go prevent an incredibly violent rape.

Moench’s trying though, he’s definitely trying. The issue is all one night, so there’s no opportunity to see what he’s doing with Bruce Wayne. Bruce seems downgraded, but who knows.

The comic’s bland and fine.

I could kind of guess the finish. Not all of it–Catwoman coming into play is a surprise, especially after Moench gives her a nice farewell with Batman at the open–but it’s predictable. I wonder if it was editorially mandated or if it was always Moench’s idea.

Mandrake is really impressive this issue. There are no scenes with Robin looking like a chimp; there are some crazy “Batman with eyeballs” panels full of despair. Mandrake also draws Batman as something of a behemoth in the action scenes. It’s visually compelling to be sure.

And Moench writes an effective script. He’s able to whitewash the things he never spent enough time on and turn them into backstory for better moments. He’s sort of fixed his two big problems–Robin and Batman as realized characters. These last few issues, he’s fixed them. Jason too.

Maybe not Bruce, but baby steps.

I think Mandrake draws Robin like a chimp in his scenes with Nocturna to show he’s a kid. Or he just draws really ugly expressions for kids. Everyone else has great expressions–this issue is the height of soap opera, yet incredibly effective. The whole “red skies” thing and how it plays into the daily lives of the extraordinary….

There are a lot of good scenes this issue. First, Batman and Nocturna. Moench finally gives Batman something reasonable to think about–his inability to settle down with women. Then there’s a great scene with Robin and Bullock. They’re a better team than Batman and Robin the way Moench writes them, with Robin being more honest with Bullock than anyone else. It’s the only time Jason has a personality.

The finish with Catwoman going after Nocturna? It’s awesome stuff.

Mandrake is getting better. The first half of the issue, except maybe some of the Batman stuff–the proportions are off–it’s good and Mandrake’s got some interesting expressions. They give the comic a lot more depth.

Why does it need help with depth? Maybe because Moench’s storyline–Bruce decides to get rid of all the women in his life in order to find a mother for Jason. You’d think he (and Moench) would be doing something like the dating game with all Bruce’s romantic interests… But no. Instead Moench even pushes to objectify Nocturna, who is in the book as Jason’s surrogate mother figure.

Yeah, but objectify I mean there’s a poorly drawn scene where Robin finds Nocturna seductively posing, cuddles to her, calls her mom.

And Mandrake tanks on Robin’s expression. He looks like a chimp.

It almost doesn’t feel like Moench is writing the comic. He is, obviously, since there’s the avoidance of any new plot for Jason and an awkward comment about Alfred’s daughter. Jason calls her a honey or something. But the comic has Flash villains visiting and Moench writing about how incapable Batman is against them.

Robin even talks to Bullock about how they can’t handle superhero villains. Except neither villain is super-powered; it’s Captain Boomerang and Mirror Master. There’s also an odd scene where Mirror Master is scared of some thugs. Reading the issue, it’s hard to see where Moench’s going with anything.

The problem might be the subplots–there aren’t any active ones except Bruce’s love life, which is on a far back burner. Sadly, Moench doesn’t have anything good for the front most ones.