This issue juxtaposes Morgan having a vision with the Union going into the celebrity guy’s mind to figure out what’s going on. This mind meld happens after the Union has to take out the guy’s army of zombies. Because why not.

Gravediggers is a hard book to describe. Yes, the art drives it, but Craig’s plotting and pacing gives Cypress the opportunities to excel. Quite good comics. 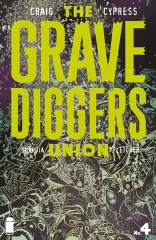 Half the action in Gravediggers Union involves the Union members doing research at a library and arguing about what’s an appropriate use of union dues.

The other half of the action is Morgan, daughter of a Union member and prophet of the Black Temple, bargaining with some dead souls for their help in destroying humanity or something. Morgan’s half of the issue is where Cypress gets to go crazy on his art–the dead souls are part of a “ghost-storm,” basically a hurricane; the art’s gorgeous. Even when people are being eviscerated.

Craig’s comedic writing comes through on the other half, the Union half. It’s exposition but well-done. Cypress’s art is strong on it as well, it’s just not a ghost-storm. It’s a trip to the library, with some very pop culture references.

Gravediggers Union continues to be a strong book. Craig’s juxtapositioning of Morgan’s story and her father’s is working out a lot better than I thought it would.

Gravediggers continues on a nice pace. It’s a suspense comic (so hopefully a limited, or at least with definite arcs) and Craig’s better at building that suspense than anything else. The pacing of the reveals this issue, as he toggles between the Union tangling with a vampire and Black Temple Prophet (and former junior gravedigger) Morgan has a trippy experience getting ready for a presentation.

Great art by Cypress. As always. Though he gets less to do with the Union than Morgan. She goes all over the place, this universe and beyond. The Union goes into a haunted house. From a haunted graveyard. Or some such thing. Morgan’s storyline opens the book up a lot, because Craig isn’t really a comedy writer. He couldn’t keep it going with just the Union.

So another good issue of Gravediggers Union. Craig’s got the momentum on the book now, Cypress is always able to carry it. It’s in its stride. 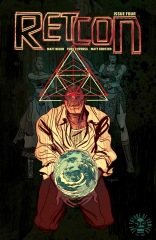 Retcon finishes with a not terrible final issue. Toby Cypress’s art is good. Nixon gets in a lot of content–too much for Cypress to keep up with at times–and it’s fine content.

The story itself is weak.

While the one guy is hovering over the Pentagon preparing to attack an intergalactic monster who has taken over the building, the mean cop is deciding whether he wants to be sacrificed to save the world. He’s got the witch and her sidekick, who probably should’ve had more to do in the book because they’re less obnoxious than the lead.

It’d have been nice if Retcon could’ve finished better. Nixon’s rushed, like he’s collapsing a longer story to four issues, but there are some decent moments and there’s awesome art. All together the series doesn’t amount to much. Except awesome art. 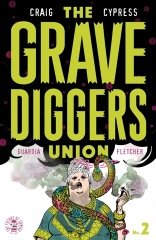 Craig splits the issue in half, between Cole and his sidekicks talking to a witch about their situation and then something with the actual situation they don’t know about. Cole’s daughter isn’t being held prisoner, she’s the goddess of the Black Temple and she’s going to bring about the end of the… something. It’s unclear what. Probably not world. Though maybe.

And she’s not an all-powerful goddess. She’s still learning how to people manage. The 1% funds the Black Temple–though the daughter, Morgan, doesn’t let it stop her from taking appropriate measure.

Cole and company are meeting a witch named Morphea in the first half. Then daughter Morgan in the second. Too many M names.

The prologue has art from Craig. Presumably some kind of pre-history magic thing. It’s fine. So far it has zero connection to the comic itself.

Cypress’s art is phenomenal. Even when you know he’s doing way more work than the panel needs, it’s such good work.

Retcon turns it around a little this issue. There’s a lot less about government conspiracy and a lot more supernatural. Also the title makes sense now. One of the characters is trying to save the world and putting a team together and every time she fails she resets time and tries again.

If you’ve seen the movie, Edge of Tomorrow, it’s pretty much exactly like that movie. Retcon doesn’t get originality points. Except in allowing Cypress to get so crazy with the art at times.

Though the art is held back a bit. Cypress doesn’t go crazy with anything. There’s one reveal with the bad guys in particular where Cypress could easily have filled a page with it but instead just gets a little panel.

And the dialogue’s not great. In fact, Nixon’s exposition is a little worse. The supernatural stuff gives Retcon a boost, but it’s still trope-y and tired.

Still. It’s more compelling than it was last issue. 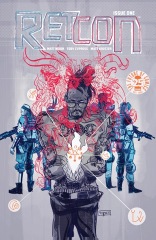 Toby Cypress’s art is wild, but constrained and thoughtful. Matt Nixon’s script is fine. The comic drags in parts, speeds in parts (especially in the cliffhanger setup), but it’s fine. It’s engaging, even if the characters don’t get any sympathy besides being possible victims.

I’m trying to imagine worse writing than Frank J. Barbiere’s dialogue in The White Suits. There’s got to be some out there but it’s so shockingly terrible, my mind is clouded over. Lines from this issue repeat themselves, kind of like a hammer to the temple.

And it’s a shame, because Toby Cypress does a really solid Paul Pope impression. I can’t say he’s Pope-lite, like a lot of people these days, because much of his detail work is an impression. His dollar bills look like Pope’s dollar bills in One Trick. But whatever, Cypress makes it all look good.

I actually thought the art would make the book tolerable. Like it could somehow overshadow the lousy writing. It can’t.

I’m beginning to think all these highly affected dialogue and narration styles are just to hide the bankruptcy of ideas. Suits’s Dark Horse; I inexplicably expected more from them.

Jeter runs out of space here a little. He’s got an exciting conclusion, but then he’s also got a big special effects conclusion (Cypress is disastrous as rendering it, unfortunately) and some more talking heads stuff.

Also–and here’s why I was confused last issue. He’s got the station commander–Major Kira (you can’t refer to “Deep Space Nine” characters and expect non-Star Trek aficionados to know them)–using the exact same dialogue the evil guy used when he was possessing people. But it’s apparently not done to raise suspicion. It’s like Jeter copied and pasted dialogue and didn’t think about the context. The editor should have caught it.

This issue is probably the least successful for the above pacing and art reasons. It also ends on a humorous note, mimicking how a television episode would end. But it doesn’t work because it’s way too slight.

The series should have run five issues. 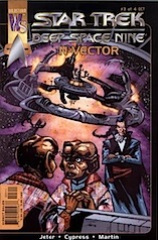 This issue is the all action issue. Or close to it.

I think N-Vector is most useful–not to discount its success as an episode of “Star Trek: Deep Space Nine,” it’s a fine episode of that television program–as an example of how television pacing can be adapted to comic books. The problem, of course, is the length and pricing. It takes four issues to get a single episode. All together, it would have been ten dollars for, basically, something one watches for free on television.

Also, this issue requires the reader be familiar with the show and the relationships between its principal characters. I couldn’t tell if people were acting out of character or if I’d missed something since I hadn’t seen the show or if the evil space entity had possessed them.