The weirdest part of the annual–which is mostly a Batman story, which doesn’t suit Pat Broderick’s pencils as well as the Swamp Thing–is Chester getting stoned with Labo. I always understood Labo to be a stand-in for Alan Moore… so Stephen R. Bissette wrote a scene with Alan Moore getting stoned?

The scene doesn’t work. Labo’s presence is too strange at Chester’s, too much like a sitcom.

Otherwise, it’s a fairly okay issue. It’s not much of an annual. Bissette does write Batman as a violent madman, which is sort of interesting, but Swamp Thing’s got so little to do it’s never compelling. It’s especially distressing how little Alec cares about his neighbors.

Broderick has a lot of little art problems–very small heads on big people and so on. 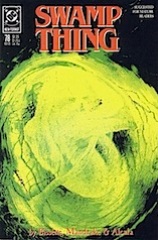 It’s another fill-in issue–Mandrake’s on pencils again (with Alcala inking); Stephen R. Bissette handles the writing chores. It’s also filler narratively, but very nice narrative filler. Bissette doesn’t have much for Abby to do, however. He sends her on another trip to the afterlife, which could be eventful, but instead she just hangs out with Alec Holland for a few pages.

The other Alec, though, Bissette’s got a lot for him. The issue’s something like Bissette musing on how Swamp Thing would be relating to the new developments. It’s a relaxer issue, but a beautifully paced one.

Bissette has this incredible twist in the issue. Bissette paces things for the one sitting read, not an eventual trade. Swamp Thing is a great example of how trades changed comics writings for the worse.

The issue’s not without problems–the end twist is a little outrageous–but the issue’s fine.

One could, if so inclined, sit and try to figure out who drew what–Alcala’s such a unifying inker on Swamp Thing, it’s hard to tell Bissette and Veitch apart. Yeates I could easily identify, just because of the startling photorealism.

For his last issue, Moore avoids sentimentality. His plotting is gradual, relaxed. Much of the issue is spent with Swamp Thing thinking about the state of the world and his place in it. The big decisions in the issue are rather small. He and Abby decide to retreat from the world for a while.

Moore is putting his characters–he owns them in this incarnation–up off the floor for a while, in a lovely treehouse to stay safe.

It almost feels like Swamp Thing can’t go on; not because Moore’s shut off narrative possibilities, but because there’s no point.

Moore’s writing is gentle. His finale is nearly precious.

Stephen R. Bissette comes back to Swamp Thing to script a fill-in. Well, maybe not a fill-in. I mean, I’m sure Moore was busy with something else, but the story itself isn’t disposable. It’s just an Abby issue when the series has become, for a while anyway, about Swamp Thing.

The issue serves a couple purposes. First, it shows what Abby’s up to while Swampy’s off having an interstellar adventure. Second, it shows how Arcane’s time in Hell is being spent. It keeps Arcane, even damned, constant in the series.

The majority of the issue is split. Half is Abby at her new job, encountering personal difficulties with caring for the elderly… and dealing with criminal coworkers. The rest is her father, the Patchwork Man, on an unlikely quest to find her.

The juxtaposing is a tad contrived, but Bissette and Veitch fill the issue with sincere emotion.

While touted as an anniversary issue, Swamp Thing barely figures into this story. Moore’s upfront about his limited role–the comic opens with Cain and Abel, after all. It again features guest appearances from the DC supernatural set, with a couple deaths involved.

Moore eventually does make it all about Swamp Thing, but in a relatively quiet way. His experiences and questions about himself inform the greater story, which is a really big one. It’s an all action issue, but the most important action is very quiet dialogue.

What’s strangest about the issue is the lack of intensity. Moore’s done a lot with ominous, disturbing details, but they aren’t present here. Demons are again reduced to funny looking creatures, for example. The supernatural landscape is nowhere near as disturbing as the human one Moore’s been moving through.

Moore brings the fantastical down to manageable size.

While I love this issue–the way Moore tells the reader the ending is going to be awful, then still manages to make it even worse (without a drop of blood), is awesome–the cover does imply something else entirely. The cover implies, between the banner and the superheroes, a Crisis tie-in.

And I suppose Moore does deliver to some extent. He does send Constantine and Swamp Thing off into regular DC superhero land where they get a mission for helping save the world. But their mission really has nothing to do with Crisis. It’s too disturbing to be mainstream; Moore thoroughly grounds it in reality.

In many ways, even though the issue shows how Swamp Thing doesn’t fit with superheroes, it shows how Moore can make anything work. He brings horror to comedy and vice versa.

It’s excellent work from Moore, Bissette and Totleben… even if it’s superfluous. 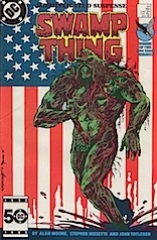 I never thought I’d be making this statement–but I can’t tell Randall from Totleben. Randall does some of the inks here and two inkers are seamless at first read. Maybe if I had been concentrating more on the art….

Instead, this issue of Swamp Thing is a big mishmash and, against the odds, it works.

I mean, there’s a scene with Batman bumping into Constantine and Mento (from Doom Patrol) on the street. Moore’s integration of Crisis is hilarious. He acknowledges it, but treats it as inconsequential. I guess they already knew Swamp Thing was safe from a relaunch.

There’s a great scene with Abby being rude to Swamp Thing, then him sulking. But it’s a small moment and the rest of the issue is about a serial killer.

His trip to Louisiana does not go well.

It’s a good issue; however, its parts are better than the whole.

In a strange but significant way, Moore cops outs with this issue. He concludes his possessed slave descendants story without examining any other the racial elements he brought up in the previous issue. Instead, he conveniently brings in some zombies, some hallucinations and Swamp Thing… everything ends very nicely.

Actually, it ends nicely for zombies too. It’s Alan Moore ending on a joke. It’s a creepy one… but still a joke.

What’s so inexplicable is that shift in tone. Moore set this story up to be serious and, instead, it’s a little episode in the life of Swamp Thing and Abby. Nothing to fret over.

But here’s another interesting detail… it’s utterly fantastic. Moore’s mix of horror and action works great, as does the artwork. Bissette and Totleben bring their disquieting but digestible horror art.

It’s a great issue. But it’s not special, which Moore previously implied it would be.

So in 1985, Moore did a frank story about racism. That feature alone would make this issue of Swamp Thing significant, but it’s far from the most stunning part of the comic.

Hollywood has come to the swamp and they’re making a miniseries about plantations and slavery. The evil of the plantation reincarnates, down to the local black extras being possessed by their slave ancestors. It’s a little shocking, especially when one considers Moore’s British (which does give him the observer’s perspective), but Swamp Thing’s a plant and Abby’s from the Balkans. It’s a stunning issue with some great supporting characters.

Moore forecasts his plans from the start, but it’s still a shock when he executes them.

Of course, the art’s essential too. Alfredo Alcala inking Bissette provides some interesting results. The figures still have the fluidity, but Alcala sharpens the lines. For a horror story, it’s a great style. 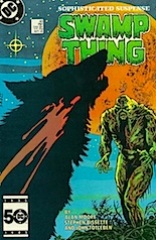 This issue’s kind of a downer-in-one. Bissette and Totleben are back at full strength and do a great job. The story concerns a housewife whose lycanthropy manifests itself (seemingly for the first time) while Swamp Thing’s in town for a visit. Moore juxtaposes the woman’s problems against the history of a local Native American tribe and the sufferings of that tribe’s women.

Bissette and Totleben have the task of mixing both those elements with the visiting Swamp Thing.

Strangely, it’s not exactly a visual feast–the art isn’t exuberant as much as measured. They’re carefully telling this story and they do a great job of it.

But Moore’s also moving his Constantine story along here too, but behind the scenes. There’s only a page of Constantine and he’s only briefly mentioned before. Alec and Abby briefly talk about him.