Even with some great Gil Kane art, the last issue of Atari Force is a tad meager a finish for the series. Kane doesn’t have to suffer through a lot of video game-type space action, but there’s some and it’s too much.

Worse is the romance. Thomas and Conway promote it to a full-fledged subplot for the issue–worthy of a real flashback, then don’t give it one. Instead, the flashback is to these alien pacifists. That element of the story–intense non-violence–is kind of nest in a comic about blowing up Cthulhu-like space monsters, but it’s underdeveloped too.

The issue ends with a promise of another series, which might explain some the problem with Conway and Thomas’s script. They’re already looking ahead instead of concentrating on what’s going on here. Or maybe they just made things so big they’re unmanageable.

Andru’s back for exactly the type of comic I expected with the title Atari Force. It’s roughly eighteen pages–I’m not counting the double-page spreads–and most of those pages is like watching someone else play a video game. Only it’s an Atari game, so the designs are pretty childish. (Not to knock Atari game designers, but how many bits of graphics did they have? Two?).

The issue recounts the victories of a fighter pilot who singlehandedly shuts down an evil alien species mining planets with slave labor. The regular cast does make some appearances, but only once do Conway and Thomas bother giving them any depth in their scenes. And that one instance is never resolved. The rest of the issue makes that scene moot anyway.

Even though the characters are still visually bland, Atari Force gets Gil Kane on the art and he knows what he’s doing. It’s a big read instead of a long one. Writers Conway and Thomas split the issue into three chapters, but it’s more like two–there’s even a cliffhanger mid-point.

For this issue, there are no more flashback introductions. Instead, there’s a somewhat weak flashback explaining the alien planet they find. It’s bumpy but passable.

Conway and Thomas to continue their rather serious look at what should be a goofy comic. One of the characters is a pacifist, burnt out by all the warring on Earth, and he doesn’t give up his convictions. There’s not a lot of fallout from it, but the writers do return to it a few times and the guy does turn out to be right.

With Kane, Force is all around competent now.

This issue covers two more team members–both new members whose little origin stories come right after their introductions–and both of their stories are, once again, rather rough.

First there’s the Indian guy, who only got out of poverty because some British guy mistakenly accused the kid of theft and a tragedy followed. Then there’s the head of security. For her, Thomas and Conway have a really depressing war story. Atari Force, for all its jumpsuits and Atari lingo, is a rather grown-up comic. Not what one would expect from a game tie-in geared at kids (were Atari consoles aimed at kids?).

There’s also the bigger story. The team comes together to travel between alternate realities to find a world for the benevolent Atari corporation to colonize. So no big sci-fi action yet, but soon.

The art’s still a little off, but it’s fine enough.

Atari Force is immediately strange on three levels. First, it’s game tie-in to the company, not a game. Second, it’s a reduced size comic and all the art looks too spacious. Ross Amdru is clearly trying to fill things out.

Finally, writes Gerry Conway and Roy Thomas borrow lots of sci-fi movie tropes. But they don’t apply them in the standard way–they turn them into action set pieces. Atari Force, despite Andru’s awkward page layouts, is something of a direct precursor to the 2010 film. It’s technological excitement in a sunny post-apocalypse.

This issue deals with a couple characters who are heading to Atari headquarters–it’s called something else, maybe the Atari Institute–to help save the world. Something along those lines. There’s actually a really tough flashback to post-World War III Africa. It’s not gritty looking, but it’s serious.

It’s a rather strange comic. 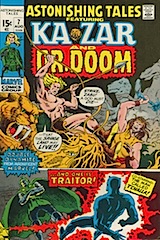 If Herb Trimpe spent as much time on his figures as he did on the shading lines, his Ka-Zar story might not have been hideously ugly. It’s actually passable–ambitious at times even–until the dinosaurs show up. Trimpe can’t draw dinosaurs.

Roy Thomas scripts the story, which is an extended chase and fight scene. The narration’s weak and the dialogue’s weak. Ka-Zar is annoying with his Tarzan speaking, but he also lacks any personality. Sure, he’s got a sabertooth tiger for a sidekick… but it doesn’t make either compelling.

And Thomas’s conclusion is inept.

Then Gerry Conway and Gene Colan do Black Panther versus Doctor Doom. Frank Giacoia isn’t the best inker for Colan, but he’s not bad either. Sadly, Conway’s script is annoying beyond belief. He constantly questions the characters in the narration. I’m not even sure what person it is.

Overall, aside from Colan, it’s a waste.

I suppose if someone wanted to read some really bad seventies young person counterculture dialogue, he or she could read Roy Thomas’s Adam Warlock story. It’s painful to read. And eventually painful to see too.

It’s another issue where Gil Kane’s art falls apart after a certain point. There’s this private detective who Kane draws terribly, but also disturbingly. He looks like an evil, poorly drawn Peter Lorre.

Oh, and the villains. The villains are these giant animals–a rat, a snake–and Kane butchers them. It’s like he can’t draw anything but regular people. Worse, the art all starts good and then plummets.

There’s a Jimmy Woo backup too, from Jack Kirby. It’s not any good, but it’s mildly interesting as a fifties relic.

For some inexplicable reason, probably because he liked to read himself (I don’t think Marvel paid by the word in the seventies), Roy Thomas has his protagonist spouting expository dialogue every panel.

Thomas and Gil Kane do the feature, Guillvar Jones, and it’s beautiful to read. Kane eventually does have some weak panels, but most of them are fantastic. Lots of fluid movement. Just great.

And Thomas doesn’t do bad with the first person narration. It’s fine. All the expository dialogue (protagonist talking to himself) is terrible and narratively pointless, if not incompetent.

The issue also has some old reprints. There’s a pretty good giant sea monster one from Stan Lee, Jack Kirby and Steve Ditko. The twist is the sea monster is intelligent, but Lee doesn’t explore that point enough. Nice art.

The other reprint is sci-fi (from Lee and Don Heck). It’s fine until the moronic ending. 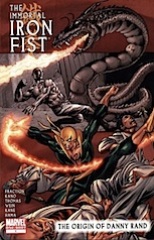 Thank goodness Marvel felt the need to recolor the first two appearances of Iron Fist with some terrible glossy digital coloring from Andrew Crossley. Someone with time on his or her hands should do a comparison between Crossley’s “modern” colors here and the originals from Marvel Premiere.

Oddly, there’s a classy opening from Fraction and Kano–I think that opening must be Fraction’s last work on Iron Fist–and Kano does his own, non-glossy colors.

The origin issues hold up pretty well. Both Thomas and Wein write in the second person, which makes the whole experience–learning about K’un-L’un, Iron Fist’s origin, Danny Rand’s traumatic childhood–palatable. Kane pencils the first part, Hama the second, Giordano inks them both smoothly. Even the silly coloring can’t mess up Giordano inks on a kung fu comic.

The cover announces Gene Colan on art, so does the title page, so obviously DC wanted to sell him on the book. But then why did they put him with Gonzales on inks? It barely even looks like Gene Colan. All the detail in the faces, for example, is gone. Except in close-ups and those are the best panels.

In this issue, Batman fights the Mole. I don’t think the Mole ever makes a return appearance. These eighties books seem intent on creating new villains who never get invited back. The issue does have some potential–at one point it’s an old dark house thriller at Wayne Manor with Colan art and that combination works, even with the inking problems.

Thomas clearly wrote some of the dialogue. It’s very expository in a way Conway doesn’t write expository dialogue. Some of its rather goofy.

It’s forgettable, but probably worth the sixty cents.