Most of this is very lame. Lee Bermejo’s opening story, for example, featuring a revisionist take on Robin’s training… very lame. Beremjo goes for tough and real, then ends on a bad joke.

But it’s nothing compared to Damion Scott’s entry, which has Bruce Wayne’s internal narration a hip hop song. Even if one likes Scott’s art, there’s nothing to like about the idiotic narrative.

Marv Wolfman’s story–with Riccardo Burchielli doing a fine job on the art–has Batman trying to save a wrongly convicted death row inmate. Is it a familiar character? Like one who had this same story told in a graphic novel in the nineties? Who edits this?

The Rian Hughes future one is dumb. It’s supposed to be funny. It’s not.

Then Paul Dini and Stephane Roux turn in a truly fantastic final entry. Shame the rest of the stories aren’t a tenth as good. 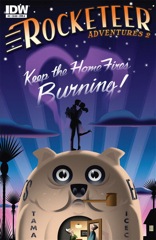 I’m having a hard time buying the Rocketeer as Captain America. The first story, from Tom Taylor and Colin Wilson, sets Cliff up as an official U.S. military superhero. It makes no sense. Especially not fighting giant robots. But the story’s good anyway. Taylor structures it well and Wilson’s art is great. Very effective work.

Paul Dini and Bill Morrison’s story is not so effective. It’s actually rather annoying. It’s an unfunny episode of a Rocketeer cartoon–cartoon as a pejorative. Dini writes cheap jokes and weak characterizations. Morrison’s art isn’t terrible, but it’s nothing special.

The last story, by Walt Simonson and John Paul Leon, is dumb. The Dini story’s unrealistic and moronic, but this one is dumb. There’s a difference. Simonson attempts realism and fails. Leon’s art is way too design oriented; it’s static. The Rocketeer can’t be static.

Except the first story, it’s a weak issue.

So in the mind of writer Paul Dini, human traffickers take women from the United States and ship them overseas. I really hope he’s not heading a commission for the U.N., because that situation isn’t accurate.

Catwoman opens, in an attempt to show just how grown up DC’s cartoons are, in a strip club. I wonder how many parents are going to buy this movie for their kids and then realize the filmmakers think mature storytelling means pornographic implications.

Sadly, director Montgomery is excellent. Though Catwoman’s really silly—she swings around on a whip, doing Spider-Man stunts—the direction is amazing. Until the final shot, which is too goofy, there’s not a single false moment.

The cartoon’s fast, which is nice, but can’t disguise the mediocre voice acting.

Eliza Dushku is okay (nothing more) as Catwoman, but John DiMaggio’s weak as the villain.

Besides the writing, it’s essentially competent.

Produced and directed by Lauren Montgomery; screenplay by Paul Dini, based on the character created by Bill Finger and Bob Kane; edited by Margaret Hou; music by Christopher Drake; released by Warner Premiere.