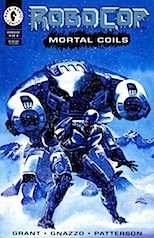 It’s so, so bad. I mean, I thought since Grant turned in a decent third issue, he might be able to pull off a fourth too, but no. It’s just awful. It’s hard to explain how bad it is without sitting down and reading it because it’s just so unbelievable.

Grant goes for this melodramatic ending and then somehow gives his terribly paced limited series too many endings, the first time showing the inspiring human spirit of Robocop with his girlfriend–sorry, sorry, his female lab technician friend–and then having a comedic finale with the U.S. government about to kill Robocop and him getting saved by some asinine nineties punk criminal guy who he teamed up with for a bit.

It’s so funny Dark Horse let their licensed properties tarnish the image. I mean, I always thought Dark Horse at least tried at this point, but not at all.

It doesn’t take much for an issue of this series to be better than before, since the first two issues–and lots of this one–are so exceptionally terribly, but this issue does have some imagination to it.

No, not imagination, sorry, what was I thinking… not imagination. Storytelling competence. Steven Grant’s probably written two thousand comic books, it’d be hard for him not to have one acceptable moment and he does, here in the third issue, and it’s a pretty good moment.

Robocop saves some crooks who are going to strip him for parts and it pays off for him.

Amid Grant’s idiotic Denver as lawless future robot city with Grapes of Wrath bad guys (in terms of setting up labor camps), there’s that one decent moment. Oh, wait, there’s Grant’s super-buff, super-tough guy too. He loves those lamers.

The problem, occasionally, here at Comics Fondle is the length constraint. Each review of a standard issue is one hundred and fifty words. I have five words to say about Robocop: Mortal Coils issue two. What a piece of crap.

So how to fill the other hundred words?

Does it matter what’s wrong with it?

I mean, does one even have to read further to figure out why a licensed property comic from the nineties is a piece of crap? Doesn’t it go without saying the writing is awful and stupid and misogynistic? I did like seeing some reference to the Robocop movies before Robocop 3, however; I guess that slipped past the editors, since the license is apparently only for Robocop 3. They’re arguably discrete references.

Or the art? Is it a surprise nineties art isn’t exactly… visually tolerable?

There’s nothing worth saying about this comic at all.

How to start… maybe licensing Robocop 3 instead of Robocop is a bad idea. I mean, it’s not like The Terminator, where licensing got all split up, sequel after sequel. Dark Horse could have gotten Robocop and not had to do sequels to Robocop 3, right?

This issue is Robocop in Denver. It’s kind of like Passenger 57 is Die Hard on an airplane. No, it’s not. Look at how hard I’m trying to figure out how to talk about this tripe.

Denver is apparently worse off than Detroit, which is stupid and doesn’t fit into the movie mythology–it’s another Judge Dredd lift, or maybe a Road Warrior one. I don’t know. I don’t care. It’s amazing how lifeless licensed properties got for Dark Horse just a few years after they revolutionized the genre with Aliens.

Mortal Coils is going to be awful; banal and inane. Three more issues….