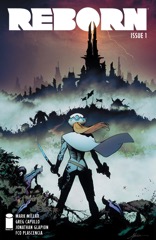 Highly derivative fantasy sci-fi afterlife tripe. An older woman dies and discovers she’s Amethyst, Reborn in a Terminator/LOTR knock-off fantasy world. Capullo’s dragon and dropship art is stronger than his people. Millar’s writing isn’t strong on anything. He even rips off some Watchmen here.

I like how Mark Millar has gotten to the point I don’t even bother forming an opinion on his first issue. Take Chrononauts. Good–but surprisingly not great–art from Sean Murphy. Of course, Millar often works with good artists.

The story? Time travel in the near future. Millar comes up with something rather interesting, the idea of a time traveling satellite going back in time, transmitting video of an event, crashing down in a different time period. It’s cool. Then he gets to the guys who are going to go back in time. Both are rock star scientists–because Millar has to write rock star something or others–one has an ex-wife, one is a lothario. Millar’s not stretching here. He’s got his characters, he recycles them.

But the time travel stuff with the guys? Boring. Feels like a Stargate comic. 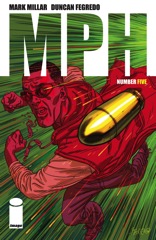 Millar gets to a nice manipulative finish on MPH. He does give Fegredo a bunch of cool stuff to draw and the art’s great, but Millar has enough story for another five issues and he doesn’t want to tell it.

He suggests MPH is deeper for his lack of interest in proper storytelling, but it’s really not. It’s just more manipulative.

Half the issue is spent on a super-speed fight sequence. It’s pretty cool, actually. If it took the whole issue, it’d be even more cool. And then Millar could save the two big reveals for another issue, which would’ve worked a lot better.

But it still wouldn’t have been good. Because one of Millar’s reveals is a huge one and he tries to pass it off as small potatoes. It should be the defining element of the series; it’s not. Because it’s not flashy enough.

There’s quite a bit of talking in this comic. Not just the lead characters, who talk a whole bunch, but also the government guys out to catch the lead characters. There’s also a revelation scene, which Millar doesn’t do particularly well. It’s a talking heads issue and Millar is just dumping exposition to set up for the finish.

He opens the issue with the secret government agency explaining most of the backstory to the drug and to the mysterious prisoner, who’s been so unimportant he’s barely memorable. Millar plays some tricks, since he’s dealing with fortune telling and, presumably, next issue will have a big surprise or two, but the problem with MPH is the characters.

They aren’t just unsympathetic at this point, they’re annoying and tedious. Millar didn’t set them up strong enough and without development–especially after all the talking–they’re just dragging the comic down.

Leave it to Mark Millar to screw it up when he's got a good thing going. Even without the terrible soft cliffhanger, MPH does have some fantastic art from Duncan Fegredo. Fantastic enough to probably make the comic worth a look even if it didn't have a serviceable script.

There are all the standard Millar problems. It's too self-aware, the pop culture references are too forced, probably a few other things but I ignored them. However, Millar does write a good first person narration for his protagonist. It's some small time crook who ends up in prison for a relatively small crime and then gets superpowers.

The superpowers come from a pill called MPH. There's going to be an idiotic explanation for it, which the soft cliffhanger foreshadows. Still, the way Millar shows the guy's experience is fantastic.

The comic's predictably problematic (given Millar) but it's better than expected.

For the third issue of Starlight, things are coming together. Well, not so much things, but Millar’s writing. He’s pacing out the narrative a lot better. There are probably six or seven scenes this issue and they’re mostly good scenes. The cliffhanger is a little abrupt and he spends too much time with the lame villain, but the stuff with Duke is all pretty great.

Except maybe how Millar resolves the big action sequence. There’s this fantastic fight scene with Duke taking on a bunch of bad guys–Parlov does beautiful work with the figures, but also with how he lays out the panels on the page–except then Millar remembers Duke is an old guy and has to get real. The real part’s problematic.

And the followup with Duke; not great. But otherwise, all of Duke’s scenes are great.

I was expecting a lot more from Starlight. This new development where series totally fall off after strong openings didn’t seem like something Millar would fall for, but this issue suggests otherwise. Duke argues with a kid from the planet he saved about whether he’s going back to save them again.

Of course he’s going to go back. Otherwise there’s not a series.

About the only time the comic shows any signs of life is when Duke says they’re going to show off the spaceship to all the people who said he was crazy. And then Millar fails to deliver anything.

So it’s a redundant, predictable talking heads book. Without very interesting art. Parlov doesn’t do a lot of backgrounds and his panels are simplistic. There’s an overemphasis on the kid, who’s not particularly interesting, and most of the moodiness about Duke’s solitude is gone.

Starlight’s dimming. It’s too bad too.

Starlight is not an original idea. Goran Parlov’s composition even mimics The Incredibles when establishing the protagonist, one Duke McQueen. He’s not a John Wayne character, he’s Flash Gordon or Buck Rogers. Except he’s gotten old. His kids are selfish little pricks–again, not original–but he’s pushing through.

He’s also exceptionally well-established in just one issue. Mark Millar uses flashbacks to his adventuring to show who he was and then little scenes in the present to show how he hasn’t changed too much.

Is Duke going to go and save the galaxy again? One hopes–oh, wait a second, didn’t Garth Ennis do Dan Dare with this treatment. Like I said, not original.

But it’s earnestly done. Parlov’s art is fantastic. The fantastical stuff gets pushed further thanks to Parlov’s realistically minded but not realistic stylings. So obvious the Earth stuff works.

It’s light reading, but wonderfully so.

Maybe not everything should get an Ultimate version.

Except the arc’s not about them, it’s about Ultimate Silver Sable, who’s apparently a corporate espionage person. Does she need an Ultimate version? Hard to say, but definitely not the way Bendis writes this issue.

She has all these morons working for her (the Wild Pack, I think) and Bendis is clearly enjoying writing their dialogue… but it’s all for a useless comic. He’s impressing himself again, which never goes well for the series.

The twist at the end, which should be played for laughs, ends up being vicious. The arc’s a misfire so far. 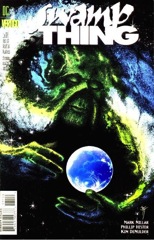 Millar hits a home run with the final issue.

He ties up all sorts of things, the little things he’s done throughout his run, the bigger things no one ever could have done without his arc. He rewards the faithful reader, with more than a few nods to memorable events in long ago issues.

The reason it works is because of Millar’s narration. He writes Alec as he changes from powerful elemental to ultimate elemental to whatever comes next. There are little tricks he does–putting some scientific terminology into the narration, letting thoughts pass without ever coming to the fore–but he accomplishes something wonderful.

Hester, DeMulder and colorist Tatjana Wood (who’s been on the book from the start) really come through here too. Millar’s got to write the unimaginable, but they have to illustrate it.

The narrative’s miraculously plotted for the reader, but never feels compromised.