He writes Swamp Thing as a pro-wrestler. A bad, eighties pro-wrestler who talks trash and sells beef jerky. It’s startling. Because the rest of the comic isn’t a gag, it’s a very straightforward–if bright–callback to the mainstream chiller comics of the seventies. Only with Kelley Jones art and out of sync Kelley Jones art. Jones has done Swamp Thing before, to great effect (I think), but… here? No. The colors are wrong, but no. Still no. Jones and Wein are out of sync.

The comic isn’t what I was expecting. I was expecting much better, not Swampy talking trash to an alligator named Albert, not cruddy narration, not too cheap exploitative cliffhangers. Swamp Thing is dumb.

Plus, Wein’s got very limited imagination for what he can do in the book. Swamp Thing on a case. Who cares?

It’s a complete and utter misfire, which is simultaneously comforting and distressing.

It’s Steve Rude doing forties superheroes, so Dollar Bill always looks phenomenal. But it’s Len Wein writing and apparently he had a bunch of homophobic statements he wanted to make so he gave them to this forties superhero so he could get away with them. Lots of anachronisms–oh, and some good, old fashioned Jewish banker jokes.

But besides being mildly offensive, Bill isn’t a bad comic. The story of a newsreel superhero pretending it’s for real makes for an interesting read. Rude has beautiful compositions, whether static shots or action scenes. It’s just occasionally offensive. Well, maybe more dumb than offensive.

It’s surprising all the Minutemen didn’t get one-shots. This guy isn’t even particularly interesting but they got a decently paced, beautifully illustrated, bad mainstream comic out of it.

So, as a comic, it’s good, but–and I can’t believe I’m saying it–it fails as a Before Watchmen title. Eddie’s a corrupt, kill-happy advisor. Azzarello gives him no special personality, not even a real character moment in the entire issue. There’s a little with him hanging out with Bobby Kennedy, but not enough to make an impression.

It’s a war history comic. Jones’s art isn’t great for the subject, but he handles it better than superhero stuff I guess. There’s definitely a morose tone to it.

The pirate backup, shockingly, has a plot point. I didn’t they even bothered.

I thought J.G. Jones was a better artist. I don’t know why exactly, but I did. His figures in Comedian are terrible. People change size, make no sense when standing next to one another. And his faces are even worse. It’s an ugly comic. I guess the editors didn’t think they could tell him to actually work at it.

Reading the creator team, I thought I’d have the problems with Brian Azzarello, but no. It’s all Jones. Azzarello does a really good job with the writing. Eddie’s still unlikable, but Azzarello gets how to make an unlikable character interesting to read.

There’s a great finish; the issue’s got a couple big historical moments. The first is somewhat slight, but Azzarello does wonders with the second.

I can’t imagine he’ll be able to maintain this level of quality plotting.

The pirate backup’s not the worst ever, but strangely annoying here. 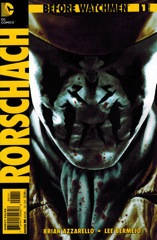 Wait, am I really supposed to take Rorschach seriously? Brian Azzarello’s writing of the narration suggests he’s never even seen the Watchmen movie, much less read the comic. It’s like he heard there was crazy narration and did a terrible job approximating it.

The series is set in 1977, in New York City. Taxi Driver would be the most obviously influence on Lee Bermejo’s art, except the art is slick and shiny. Rorschach looks desperately fake.

There’s an inexplicable, goofy lack of reality to the writing. Rorschach gets his ass kicked, but the bad guys don’t kill him. They don’t make sure he’s dead, even after they lay an elaborate trap to catch him. Instead of doing a hard boiled Rorschach comic, Azzarello writes one with less teeth than an episode of “Simon & Simon.”

The only teeth Azzarello gives this one are poorly constructed dentures.

And pirate backup is terrible. 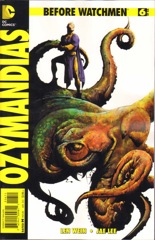 So Adrian has constant video surveillance of Dr. Manhattan but he gets important news from the newspaper? Shouldn’t he have agents or spies or… own a newspaper?

I’m being too kind. I mean, if one assumes the finished scripts represent edited versions of Wein’s original draftings–assuming this situation might be a stretch, given the terrible editing on this series–I can’t imagine how bad Wein’s first drafts must read. How exceptionally insipid.

After suffering through five issues of this tripe, all Wein does with the last issue is do scenes of things Alan Moore summarized in the original series. The content’s no different.

Even as a cash grab, Ozymandias makes no sense. It’s mind-numbingly dumb and even one likes Jae Lee’s art, it’s not like Wein gives him much good to draw.

I’m left without anything nice to say about this comic. Even the last page is atrocious. 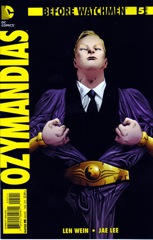 A few issues ago, Wein did a bunch of foreshadowing of the eventual reveal in Watchmen–Adrian’s master plan. This issue he has Adrian trying to figure out that master plan, which means all the obvious details from before were just for the reader’s benefit.

Wein never can figure out how or when to make Adrian the smartest man in the world.

This issue covers the police riots, sadly not doing much more with them than the original series does, only with Lee’s too design-oriented view of New York. He sucks the personality out of it, though Adrian’s tropical island works out.

There’s also a lot of terrible dialogue from Adrian’s assistant. Wein writes these characters’ conversations like it’s a back and forth from Clerks. Surely he doesn’t think that film’s characters are examples of geniuses.

Who knows… It’s so close over so I find it hard to care. 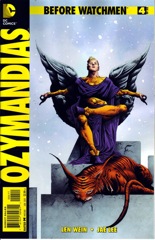 Where to start… when Wein brings up Rorschach in 1960 but then later says he doesn’t show up until a few years later? I hope the editors didn’t get paid for this one in particular.

The only distinct thing in the comic is Wein’s handling of the Kennedys. Adrian’s very judgmental of them, but then turns around and tries to solve the assassination. In another of Wein’s dumb moves, Adrian can’t figure it out. Wein sets up everything for Adrian’s easy success; Adrian actually having to think would be a nice change.

The dead girlfriend pops up. Apparently she’s been haunting him. Wein never mentioned it before, as his characterization of Adrian is completely inept.

Some weak art from Lee. His rendering of Silk Spectre is the most memorably bad (and she’s only in the comic for two panels).

At least, the pirate backup’s worse than the feature this time.

Len Wein has been writing comics for decades. He’s definitely an adult. Why does he write dialogue Yogi Bear would find infantile? Except the stuff with the Comedian making gay jokes about Adrian. Those comments read a little meta given Wein’s awkward handling of Adrian’s sex life.

There are a few red herrings to kill time before Wein makes his big reveal–Adrian had the plan for Watchmen way back in 1959. Because he’s so smart. This series would have been better spent going through the books on Adrian’s shelves than Wein’s lame attempts at a narrative.

However, Lee finally does find something he can draw. The scenes in Antarctica do look awesome.

And the pirate backup is once again better than the feature. 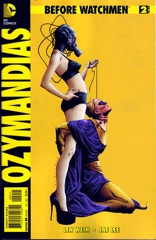 Then there’s the problem of the thugs oscillating between ostentatious dialogue and traditional moronic thug dialogue. Wein is trying really hard; it kills any chance the series has–which isn’t much, given Lee’s painfully static art.

Speaking of Lee, his rendition of the Comedian is some of the worst comic art I’ve seen in a while. There’s only the one reveal page, but it’s truly hideous.

Wein rips off some details from the Shadow–the agents of Adrian (maybe Moore had those too)–but it’s otherwise indistinct superhero stuff. Lots of cursing to show it’s a grown-up comic book and not for kids.

As for the ties to the rest of Before Watchmen, a good editor would’ve made them more integral.