Tom Mandrake is an odd choice for a superhero comic. He does an excellent job and all, but he’s so identified with horror, it’s strange to see him do capes and tights.

Sure, there’s more to Sidekick than capes and tights but it’s not horror. It’s more “realistic” superhero stuff. J. Michael Straczynski mixes Batman, Captain America and maybe Captain Marvel for his superhero pair. The superhero dies in and the sidekick has to take over.

Only things don’t go well for the sidekick. His girlfriend left him, the city makes fun of him, he extorts favors from sex workers… He’s a great guy.

Straczynski never commits to making the character a bad guy, just a conflicted soul. It’s amazing how Straczynski manages to demean the hooker the guy just extorted. Having Robin go bad might be an interesting story, but Sidekicks ain’t it.

Besides Mandrake, it’s pretty much pointless.

Straczynski turns Moloch into the martyr of Watchmen. And he gets away with it. Moloch’s such a broken soul, it’s feasible he’d bend to Adrian’s will. As for Adrian, who practically gets more page time here than Moloch, Straczynski seems to recognize what he and Moloch have in common… they’re both illusionists. Adrian’s convincing Moloch he’s doing the right thing, which includes killing lots of people.

The issue covers the time Moloch leaves prison–Adrian gives him a job fit for a member of the Red-Headed League–up until his death. Because Straczynski is so concerned with explaining another side of Adrian’s master plan, Moloch doesn’t really get to do much. He’s broken and sympathetic, nothing more. It’s too bad, since Straczynski writes him pretty well. He’s almost lovable.

Oh, and the pirate backup finally finishes. Higgins uses a lot of color for it but it’s still utter crap.

Even though Moloch appears in the original Watchmen, there’s a lot more talk about him than show. J. Michael Straczynski turns the character into a quintessential sympathetic villain. He was born with deformed ears, leading to teasing in childhood and other tragedies later in life. Straczynski uses first person narration, making the reader identify with Moloch even more.

Straczynski recounts most of Moloch’s career this issue–presumably next deals with how he ties into the original series’s big reveal–and it moves at a nice pace. Eduardo Risso’s a great choice for the art; he handles the forties time period beautifully. He plays with a lot of false innocence visuals.

I’m a little surprised Straczynski was able to do so much with Moloch. It probably helps he didn’t try too hard and it’s only a two issue series. The brevity helps move it a whole lot.

More 2001 visual references–heck, maybe even a 2010–and Hughes gets over his aversion to Jon’s big blue penis… but it’s a lackluster finale issue.

Straczynski has to tie into the original series, which means bringing in Adrian, and the whole thing becomes a bore. He not only doesn’t do anything interesting with Jon–the monolith epilogue should have been the whole issue–he writes a very annoying Adrian.

For the first time in the series, Dr. Manhattan feels like just a tie-in comic. All the originality Straczynski previously showed is gone. It becomes perfunctory. It’s too bad.

The series’s big question–what does Jon want out of his existence–never gets addressed. And unlike Moore, Straczynski doesn’t play it like a precisely choreographed graphic narrative experience–Jon has too much character to just get pushed aside for Adrian. 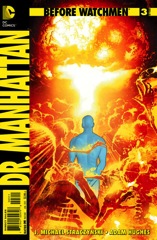 In a lot of ways, Straczynski has turned Dr. Manhattan into a neatly disguised rumination from a fictional character questioning his relationship with his environment. Jon wants to change his personal narrative to make it a happy one, which turns out to end the world. One has to wonder why he didn’t just try to remove the costumed adventurers all together… as in our reality (all Straczynski’s quantum mechanics has got me talking like he does), there was no nuclear war between the Soviet Union and the United States.

It would’ve been too cute maybe.

Straczynski continues to write Jon quite well. He captures some of the isolation and melancholy from Moore’s characterization and expands upon it. The whole family history thing is fantastic.

This spin-off is probably the best thing Straczynski has written.

Great Hughes art (he wimps out on the detailed blue penis though).

Straczynski and Hughes aren’t satisfied with just playing with Watchmen here–Hughes does a lovely montage featuring imagery from the prequels and the original–they also feel the need for a 2001 reference. Dr. Manhattan is interesting because of that ambitiousness.

For example, Straczynski’s writing is concerned with being smart and thoughtful. The series is an informed layperson’s rumination on quantum physics. He’s designing the whole comic around the idea Jon can unmake the universe based on how he choses to perceive it. That idea’s a big one–and Hughes is the perfect artist for the fantastic reality of it–but it’s not necessarily tied to Watchmen.

Instead of wrapping himself around the original’s mythology, Straczynski takes some characters and details and goes off in an entirely independent direction. Even when he does tie into the other prequels, it feels organic.

The pirate backup even looks quite good.

There’s something cool about Dr. Manhattan. Not just because Adam Hughes does the art–though the way he’s able to be stylized and still fluid is impressive; I wasn’t expecting him to do sequential so well.

And it’s not cool because J. Michael Straczynski tries so hard to ape Alan Moore’s “voice” for Jon. It’s cool because Straczynski actually comes up with something a little different than the rest of these Before Watchmen books.

So between this approach, Hughes’s artwork and Straczynski’s successful aping of Moore’s voice for the character, the issue’s not bad.

The pirate backup, however, is horrendously written stuff.

Once again, I’m left wondering if there’s some intentional misogyny in these Before Watchmen series just because it would horrify Alan Moore.

This issue we learn Nite Owl has this costumed madam–something Straczynski never makes feasible–in love with him and he’s in love with her but he later mocks her in Watchmen to Laurie.

I’d forgotten that particular detail from the original series, but wow, Straczynski really harps on it. I like how Hollis gets a pass, how Rorschach gets a pass, but not the madam. Unless Straczynski’s whole point is to make Dan unlikable and to make people dislike him when rereading Watchmen.

As I doubt anyone would reread Nite Owl. I’m not even sure the editors read it.

It’s shallow, trite and mean. Lame tie-in to the original series at the end too.

Kubert’s art is awful but I think his dad had just died. 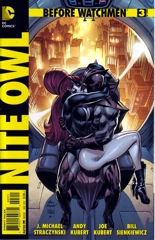 Well, Straczynski doesn’t spend too much time with Rorschach this issue, just enough to remind everyone he’s around. He also doesn’t continue the narration from Dan. Why? Because Straczynski doesn’t go for any kind of narrative continuity; Nite Owl’s an editorial disaster. I guess no one told Straczynski to at least be consistent in his lameness.

And, except the art (which is often quite bad), Nite Owl’s more lame than anything else. Straczynski treats Dan like a bit of a tool, introducing the costumed madam as a way to show off how little Dan has going for him. Because, after reading Watchmen, everyone wanted a comic about Dan Dreiberg losing his virginity to a vaguely condescending madam.

Straczynski also makes the juxtaposing of Dan and Rorschach crystal clear. Lovely to read someone who treats his readers like illiterate boobs.

The Higgins pirate thing is especially bad here too. 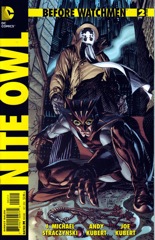 Why didn’t they just combine this series with the Rorschach one? Straczynski probably gives Rorschach a third of the issue anyway. He’s juxtaposing Dan and Rorschach’s differing Mommy complexes, which would work for a combined book. But for one called Nite Owl? Doesn’t make any sense.

There’s not a lot of callbacks to the original series here, except Rorschach getting his sign. Why doesn’t he get in his own series? Because Straczynski doesn’t have a story for Dan, not really. He’s got Dan chasing down some leather madam–gratuitously topless woman in a DC regular comic alert–because of his Mommy issues.

There’s also a lot of stuff Straczynski should have included in the first issue regarding Dan’s home life. It’s unclear how he’s a millionaire when his family lives in a very middle class home. Straczynski definitely should have addressed it.