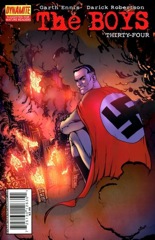 And the Ezquerras are back for the finish. It’s an awesome finish for with the Super Nazi going down–though, really, Hughie getting queasy over them attacking a super-powered Nazi is a real problem. Maybe with a vaguely sympathetic superhero it’d be different, but not this guy. I assume Ennis knows what he’s doing with it.

Vasili (from Russia) pops in for a bit and it’s good to have him back in the book. He puts Butcher and Mother’s Milk pleasantly off-guard, which they never are otherwise.

Great resolution with the Female too. Even if Ennis doesn’t want to concentrate on her, he sure does know how to use her for a good laugh.

The unfortunate part is how contrived the non-Boys storyline is getting. Ennis is always coming up with convenient turns of events to speed things along. It’s too commonplace.

The rest makes up for it.

My bad, the Female doesn’t die. I thought she did (and I took it, as a reader, in total stride).

But she makes it. And then the Boys get into a big fight with a second-rate super team. Lots of violence, but with the Ezquerra art it’s all very digestible.

A couple things stand out this issue. First, Annie gets a new costume and new origin story. While the costume appears to be a dig at Marvel’s costumes for various female heroes, the rape-centered origin is straight out of DC. The Ezquerra’ art on her subplot is awful but Ennis writes it very, very well. Her anger’s palpable.

Second, Hughie’s turned into a whiny pest. Almost to the point he’s no longer likable. He whines and complains instead of paying attention. Makes one think Ennis doesn’t have a fully developed arc prepared for him. 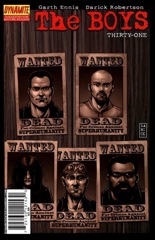 Holy crap. Ennis kills one of The Boys (or so it seems). It’s a strange occurrence for a few reasons. First, it doesn’t seem like a big change in the series. Ennis has already done a lot of jarring things, so killing off a lead doesn’t faze as much as it could.

But it should, right? Killing off a lead didn’t even seem possible before this issue. And, now, after reading it, I’m disconnect from it. It makes me question how invested I am in the characters versus Ennis’s storytelling.

It probably helps Carlos and Hector Ezquerra are on the art. Not just because the rough fight scenes are more comical under their pens and pencils, but because it doesn’t feel like The Boys proper. The art’s already a disconnect, the character’s death is coming after it.

Besides too much time on Annie and Hughie, it’s still a good issue.

Ennis saves the big tank battle for the last issue of the arc; he also does away with most of the historical details. They’re an aside. The tank crew’s experience in the battle is the focus.

In many ways the tank crew are bystanders in the issue. Ennis shows how they experience what’s happening to their fellow soldiers; not a lot happens to Stiles and company themselves. Maybe because Ennis didn’t really establish anyone but Stiles, his sidekick and Stiles’s fellow tank commander. Even with the shift in tone, Ennis is able to make the arc feel seamless.

Once again, the Ezquerra art leaves a little to be desired. It feels too crisp. The big battle scenes are occasionally confusing and not for the right reasons. The art doesn’t establish anyone but Stiles and his fellow commander and they don’t get a lot of close-ups.

Stiles and his sidekick spend the issue away from the rest of the crew, observing a famous historical battle. They participate, but Ennis mostly just uses Stiles to explain what’s going on. He does it in such a way, of course, it never feels like exposition.

It should though–I mean, Stiles’s sidekick is a generic new recruit, the perfect person to be getting the exposition. Maybe the horrific conditions makes it seem less obvious, but it really didn’t occur to me how obvious it could have been until after finishing the issue. During, one can’t concentrate on anything but what he or she is reading.

The art is still loose, but there are some amazing panels in here. Particularly the phosphorous sequence.

Ennis outdoes himself. Battlefields becomes an educational docudrama and Ennis never draws attention to that value of it. He maintains the dramatic tension throughout, especially the finish.

It wouldn’t be Battlefields without the Tankies and Sergeant Stiles. But Ennis is also doing a Korean War story–and drawing attention to the lack of attention the Korean War gets–so Ennis is coming from a different place. He’s educating.

A lot about Battlefields is different. Stiles is older and more self-reflective, for example. Te tank crew isn’t as important (so far). Stiles has a big scene with another WWII veteran as Ennis emphasizes the men returning to battle after an unsatisfying peacetime.

And the Ezquerra brothers are a little loose on the art. It’s still distinct and good, but it’s too broad and hurried at times. There’s no humor, just melancholy, and it doesn’t seem like they know how to do it.

Ennis has clearly worked hard to get the script right. He’s not doing a standard war comic, rather a specific one with familiar characters added.

I have no idea how this issue ends, but I’m assuming since Ennis is literal with Battlefields, it’s not ending with a ghost. It’s more Ezquerra’s fault, his panicked faces are all looking alike at the end of the issue. But it’s also Ennis’s fault for not leaving enough room.

The confusion leaves the arc a lot less steady than I thought possible for a Battlefields story. Sadly, Tankies is the strongest and its sequel is the weakest. In some ways, I think Ennis got too comfortable. It served him well in the first story, while here… it’s “just” a sequel. It’s horrifying and affecting, but mostly because of the familiar protagonist.

Worth a read, of course, just disappointing. 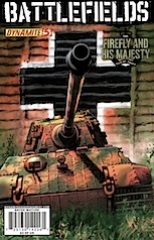 I’d like to call a foul on Ennis here for playing the reader but it’s not his fault. Maybe he knew the reader would get comfy, a little relaxed, laughing at the jokes… only to have the last couple pages of the issue knock the wind out of him or her.

So instead of calling foul, I’ll just say he makes a great turn at the end. I can’t imagine what this story would read like without Ezquerra. He does such a perfect job with the expressions. He manages the humor, the exhaustion, the anger and the horror in such a way he brings the whole issue to life.

This issue is rather full. Not a lot of time passes, but Ennis gives the reader a lot of information–there’s even backstory on the Sarge–whether about the tank crew or the Germans. The German scenes are scary.

Hey, it’s the sequel to Tankies. I didn’t even realize from the cover.

Well, I’m not sure it’s exactly a sequel to Tankies, rather another adventure of that tank crew. If I remember the original correctly, the plotting’s basically the same. The issue opens and closes with a different group of characters, here it’s some Nazis. Then we get to our crew.

The majority of the issue is talk, with the Sarge (he gets a last name here–Stiles–though he might have had it in the first series) talking to an American about an off-page tank attack (the Germans from the first scene hit a column of American tanks).

We get a brief introduction to the newest member of the tank crew and a flashback catching us up on their recent activities.

It’s a strong start for the arc. 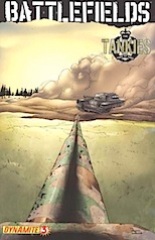 The final issue of Tankies is even better than I remembered and maybe even imagined. I’m really glad I forgot the ending–Ennis gives it two finishes, one for the tank company, one for the colonel at command–and it’s just perfect. What the colonel’s ending does is a little different–Tankies is not just a standalone story, it’s Ennis’s story about the men in tank companies….

But packaging it in Tankies, with the humor, with the fourteen-hour present action for three issues, Ennis never gets sentimental (there’s no dedication, for example). Instead, he simply presents the situation of the tank companies and goes with it.

I haven’t mentioned Ennis’s use of Geordie for the corporal. I usually loathe the use of dialect in writing because it’s usually used for all the wrong reasons. Ennis uses it for all the right ones.

Tankies is an amazing piece of work.