Dash Shaw’s style is perfect for Clue: Candlestick. His cartooning is through, detailed, and loose. His figures seem to expand and contract as needed, when they’re pontificating they seem big, when they’re recoiling they seem small. Works with them being noisy and not as well. The comic opens with Professor Plum getting an encoded letter, which reveals a bunch of backstory about the game pieces—Candlestick is a licensed Clue comic—although Plum’s physically imposing, his calm makes him seem anything but.

He lasts for most of the issue as the protagonist, or the closest thing to one, until the ending when the attention shifts to Miss White and Miss Scarlet. Shaw showcases some of the other characters throughout—especially Colonel Mustard, who does the exaggerated pontificating during the dinner scene. It’s a pretty simple first issue—the invitees go to the mansion for a dinner party, someone ends up dead, they have to solve it, then by the end of the issue someone else ends up dead. Cue cliffhanger.

Shaw plays with the board game rules at one point as he describes the “rules” for the characters investigation (it remains to be seen if they’re actually going to factor into the story or plotting) and he’s always pointing out details. Are the details clues or just details… are all details clues? Something else we’re going to have to wait and see about.

There’s some really good investigating towards the end, but with one character discovering things and, while not making any conclusions about the clues, Shaw definitely knows how set up the intrigue and the implications. It’s an extremely well-designed narrative. Better, obviously, than the board game itself. I love me some Clue but it’s not the best mystery.

And Shaw’s wholly resisting leveraging Clue: The Movie. Clue: Candlestick feels like its own thing, with the board game references just adding meat instead of gristle. 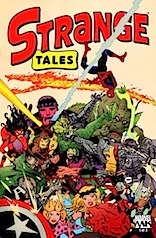 I think Strange Tales is a bad title for this one (I know, it’s a traditional Marvel title), just because they aren’t strange tales, they’re funny ones.

Wait, the Japanese one is strange (Spider-Man in a town of spider-people feeling inferior to Mary Jane).

Anyway, the funniest is Nicholas Gurewitch’s one page Wolverine strip. He’s got an amusing Hulk one too, but the Wolverine one is just awesome.

There’s some great art–the Paul Pope Inhumans tale is cuter, in narrative terms, than funny, but it’s just some amazing work from Pope (big shocker there).

The Bagge Hulk story’s all right but nothing … incredible.

It’s a great anthology, just wish it wasn’t a limited series. Marvel needs to laugh at itself more.