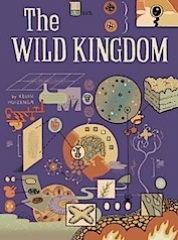 I’ve read Huizenga before, but apparently having read his Ganges series does not prepare one for The Wild Kingdom. While Ganges–Huizenga’s everyman–appears, he pretty much shows up, goes to the post office and then goes home. His last appearance as the protagonist is maybe halfway through the book.

Then Huizenga spends the rest of the time doing a very deliberate and cultivated riff. There’s some progressive, narrative logic to it, but he’s riffing. There’s a bunch of stuff about modern America, about commercials, about technology fetishes (I’d love to see Huizenga do illustrated coverage of an Apple press conference), about war, about religion, about everything one can think of. Except, maybe, protagonist Glenn Ganges.

What’s so great about it being a structured riff is how many places Huizenga can lead the reader. He’s not taking the book places, he’s taking the reader some very specific places. A great deal of the book is spent going over, on a sort of realistic “natural” level, everything Ganges encountered in the traditional narrative part of the book. It’s all very lovely and exquisite. The artwork is fantastic, which I expected, but I didn’t expect Huizenga to have such a fluid narrative style. It reminds me, though it’s completely unlike it, early Love and Rockets collections.

I don’t often say things are must reads, but Wild Kingdom is one.