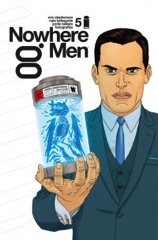 During a fight scene, one of Stephenson’s survivors takes the time to tell her adversary about being bullied over her skin color as a kid. He’s swinging a flaming stick at her. It’s a bad scene.

Other stuff in the issue makes up for it. Ben Grimm’s friend discovers his superpower–he’s sort of the Flash–and the old guys have some really good moments. But not a lot else in the issue is memorable, maybe because Stephenson is holding off on the superpower revelations.

Or because the scenes with the old guys just goes on and on. Not in a bad way, Stephenson writes them–the rock star scientists–far better than their distressed employees. In fact, Stephenson has so much to do–he brings in the big villain–he only slightly touches on some of his other subplots.

It’s okay, but Nowhere Men hasn’t done anything impressive yet. 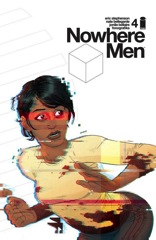 I didn’t read the three page of text matter. I skimmed it and none of it seems like I need to read it. I probably wouldn’t read it even if understanding the narrative required it.

Splitting between four groups of characters this issue shows Stephenson’s strengths and weaknesses. Even though the reporter getting sick feels a little contrived, he writes his one page a lot better than the multiple pages of the pale guy’s group of survivors.

The red Thing’s group, though, Stephenson writes them fine. With such a large cast–he doesn’t actually add any characters, for the first time I think, so he’s still at twenty-five–it’s no wonder they’re all caricatures. Some caricatures are just more amusing than others.

The mild corporate villain of the story is actually proving a lot more interesting too. 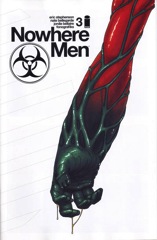 Okay, yeah, it’s the Fantastic Twelve or whatever. The giant scan man has just turned out to be the Thing. You know what I mean.

Stephenson introduces even more characters this issue–so, third issue, he’s introduced about twenty-five characters total. More if you count the hippie versions of the bad guys from The Road Warrior–Bellegarde does fine with the sterile scientific stuff, but his wigged out designs are just terrible.

He doesn’t use all the characters though, only the interesting ones. Apparently the reader isn’t supposed to worry about the boring ones.

It’s the best issue so far, but since Stephenson has done so little to define the series’s theme–it’s about twenty-five people who all want different things–it just seems tangled.

Whether or not it’s worth unwrapping is still up in the air. Stephenson doesn’t plot dramatically or memorably. It’s too soon to tell. 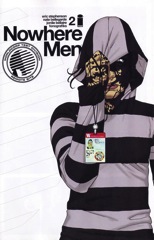 There’s so much text in the back matter, like three or four full pages. Worse, I think you’re supposed to read it to understand what’s going on.

Stephenson follows the same general narrative split. The first half has the aged scientists, the second has the twelve space scientists. This issue Stephenson reveals they’re developing strange abilities. The abilities don’t seem to do much but cause them horrific illnesses or deformities, so maybe it’s all a send-up of The Fantastic Four?

But the opening is the real problem. Stephenson is rather self-indulgent. He creates all sorts of brands for the Nowhere Men universe and expects the reader to figure out, from context, if a car is expensive or cheap. Why would someone bother?

He introduces a few new characters too but isn’t consistent with how they refer to one another. It’s a headache; the conclusion doesn’t compensate for it. 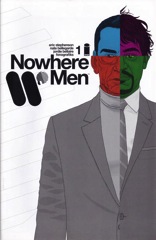 Nowhere Men is weird. Half the issue has to do with these four scientists who form a for-profit think tank. Writer Eric Stephenson jumps around a whole lot–the comic opens in the seventies with the forming of the group, jumps ahead to when they’re old, then jumps ahead further to modern day.

Stephenson’s approach to laying out the full ground situation is odd. The second half of the issue features all new characters–twelve of them–and their conversations reveal the premise for the series. Or maybe just the issue. It’s approximately sixteen characters introduced in a regular comic. While the premise is intriguing, my head hurts a little.

Artist Nate Bellegarde doesn’t have a lot of distinction between the characters either. No one looks memorable, except maybe the guy with his veins on the outside.

Hopefully Stephenson has something in addition to the concept to drive Men.