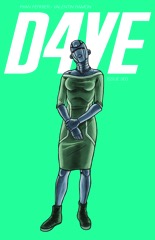 Except he makes up with his wife and he and his son bond. Why? No reason. At least the son is hanging out with him so the reader gets to see some of the bonding, but the wife just up and calls and forgives him for being terrible.

Except D4VE hasn’t really been terrible so it’s a pointless thing for her to apologize for. D4VE is clearly going to be right about the aliens–Ferrier shows the aliens plotting against the robots, shows the robots being too dumb to catch on. It’s a treading water issue.

There’s some decent art from Ramon but the issue grinds along painfully. 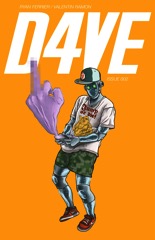 It’s a perfectly okay issue of D4VE, it just doesn’t go anywhere. D4VE’s wife is leaving him. Wasn’t she ready to leave him in the first issue? There’s no drama to it. And, given it’s about a bunch of robots, Ferrier’s oddly calm about having characters who are monotonous.

There’s some stuff with D4VE and his son, which is a strange concept–robots building little robots to emulate human behavior (these contradictions, which D4VE sometimes comments on, are some of Ferrier’s stronger details).

Some of the problem with the issue is the aliens. There are lots of aliens. They distract from D4VE’s story, but they also give Ferrier a way to manipulate the reader. It’s sort of deft manipulation, just still obvious.

Ferrier also hints at forthcoming details. There are a couple times this issue it’s all just set up for next time out.

The good art from Ramon helps. 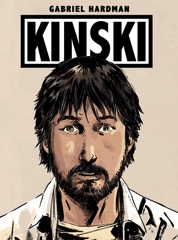 Hardman brings the story to a satisfactory, if somewhat unreasonable conclusion. He jumps through time a lot–a year total–and skips over the more interesting parts of his protagonist’s experiences. He also stops with the character study aspect of Kinski and treats the whole issue as an epilogue.

So while the narrative has a neat tie at the end, Hardman never really did anything with it. The point was the reading experience, something he succeeded executing. But the comic often feels like it could go further–and not explaining means Hardman can’t fail. However, as a narrative where he never tries to explain, it all feels too traditional.

Still, it’s a beautifully illustrated, often really well written comic book. Hardman got six issues out of a relatively slight idea–one he never significantly expanded on. It’s just a little too bad he didn’t try for more with the series. 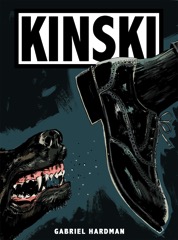 Hardman finds a better mix of the character work and the action, with his protagonist sharing a car ride with the dog’s owner and finding out a little more about her life. There’s nothing more about the protagonist (except his willingness to talk himself into bad situations). Instead, Hardman expands the supporting cast through the protagonist’s journey.

It’s almost a soft boot of the series, which started as the protagonist’s story, moved into more action oriented episodes and is now a look at the dog’s actual owners and their lives. Though Hardman does manage to get in some more action at the end of the issue.

Whether or not there’s a satisfactory conclusion, Hardman has definitely shown he can get a lot of mileage out of a simple idea and a good setting. His dialogue and character work this issue are phenomenal. And his action composition is masterful as always. 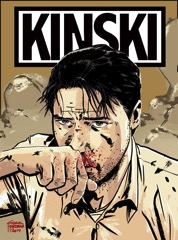 So now the action moves to the RV park, or RV gathering–it’s unclear how it’s working but the RVs aren’t parked in any sort of sensible way. Not to harp on it, it’s just strange. And the sidekick even says he needs to leave to get back to real life.

This issue is when Kinski goes from being real and strange to just being strange. It’s a tragedy now, with contrivances just to make the plot move. Bad luck following around the protagonist, who gets almost nothing to do this issue–except his action scenes. And an issue like this one, set over a half hour or less, it just… it’s too slight again.

There’s a good scene at the open with the dog owner, with Hardman taking a moment away from the missing dog (in the RV park) main plot. Its writing has personality, the rest… far less. 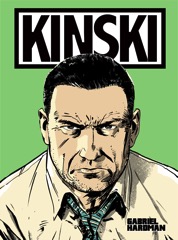 It’s the equivalent of an action issue for Kinski. Hardman resolves the previous issue’s cliffhanger, putting the protagonist and his friend back on the road. There’s some slight character drama–and a way too obvious plea for exposition from the friend–before Hardman gets to the rest stop.

Because they’re stuck in traffic; I forgot they were stuck in RV traffic. It’s a little much, though the image of the one car amid a bunch of RVs does seem like a gritty Far Side cartoon or something.

Hardman doesn’t have much in the way of character work or action this issue. All the character stuff is forced and when he finally does get to a silent scene, it’s the action scene. There’s no talking, but there’s no character work in the art, just running. Lots and lots of running.

Hardman’s timing for the panels is great… the issue’s just slight. 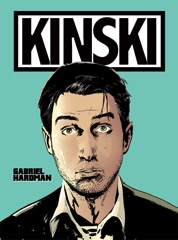 The strangeness of Kinski continues. Hardman sort of wraps the narrative around itself, with the protagonist going back to the same motel from the previous issue, having another encounter with one of the dog’s actual owners. But these similar situations play fresh, thanks to all the character work Hardman does on his protagonist.

And that character work, which Hardman is doing mostly in art, not in dialogue, is one of Kinski’s most striking qualities. It’s a character study masquerading as a more traditional epical story, with Hardman doing the former in the art and the latter in the narrative. Hardman’s not a mad scientist, but he’s definitely experimenting with traditional comic storytelling.

For the most part, the art is outstanding. Hardman never rushes himself; the panel compositions and layouts are great. Until the last scene, where he ends with a full page spread after rushing the previous page. 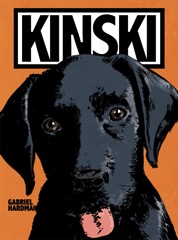 Kinski is a strange comic. The content–a business guy on the road doing a pitch and finding a lost dog–is strange. It’s even stranger given Gabriel Hardman’s stark, realistic black and white art. Hardman’s writing also ignores the quirky nature of the story and goes for realism. The awkwardness of the protagonist, now obsessed with the dog, is both off-putting and tragic.

The comic reads rather fast–besides a montage sequence in the middle of the comic, most of the issue is when the guy finds the dog and then asks other people if they know the dog. That scene ends with animal control setting up and Kinski getting even stranger.

By the end of the comic, Hardman has introduced a few suggestions of danger, some immediate, some just under the surface. But while the protagonist is often difficult to sympathize with, the comic itself isn’t disagreeable.