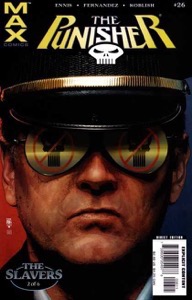 The comic opens with Viorica telling Frank what happened to her back in Moldova. Enslaved sex work. Escape. Family (father) rejecting her. Recapture. Ennis splits it into two doses, both for the reader and the characters. In between he introduces the father. Last issue he introduced the son, along with the son’s female sidekick. This issue we meet the father as he’s executing some rival gang. Ennis also uses it to start up the C plot about the son plotting against the father. Then it’s back to Frank hearing the rest of the story: Ransomed baby, escape with baby, discovery, dead baby. Occasional panels for the flashback but mostly just talking heads. Fernandez does really well with the pacing of it. Not particularly great with the art, but not bad. Not until the end, when he’s got to do enraged Frank. There’s just something reductive about how Fernandez and Koblish visualize Frank here. He’s not imposing enough. But it’s a hell of a start to the issue. And the father is terrifying—Fernandez does better on that scene than anything else in the issue.

Once Frank’s got the story we’re caught up with the end of the previous issue—Ennis doesn’t reference the narration being a year into the future until the end of the comic, but he’s still utilizing the device. Successfully. No more hiccups in the past tense narration.

Then it’s time for the B plot, involving the dirty cop forcing the good cops (the Black gay guy and the White woman) to fake injuries from their run-in with the Punisher so they can spin it as Frank being out of control. The stuff with the cops is really, really good. There’s gravitas to it but also a whole bunch of humor, including a great laugh. It’s clearly the release valve for the comic—obviously, no one’s talking about the human trafficking and endless rape.

The B plot figures in again later when Frank’s trying to get into the bad guys’ house of operations without killing any of the girls. The bloodthirsty cops get in his way, screwing up his plan. But it’s okay, because he’s got another one up his sleeve—maybe Ennis’s editor told him to end issues with a little cushioning or something because it’s back again here, Ennis making sure the reader is primed for the next issue if not fully prepared.

Fernandez’s art gets a little wonky, of course. His quality is inconsistent. At least his panel layouts are good for most of it, making the comic effective at least. How the guy’s been drawing Frank for so long without ever figuring out a consistent look, however… not effective.

But the comic succeeds on the writing alone. Ennis is bringing it.