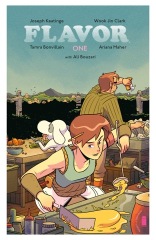 Flavor is a fantasy comic about a chef. There’s also not so much fantasy as mystique of cookery. It’s very strange, because it also operates with some loose reality to allow artist Woon Jin Clark sight gags involving the protagonist’s pet dog. He’s a good dog. Snoopy-esque, but without thought balloons.

And writer Joseph Keatinge waits to do the reveal on the dog. He and Clark pace out the revelations on how Flavor is going to tell its story, regarding the dog, regarding expectations, regarding everything.

Because it’s not just a fantasy comic with cooking instead of magic, it’s a teenager fantasy comic. Lead Xoo’s parents aren’t able to take care of her, themselves, or their restaurant right now. It turns out to be important for the issue and–presumably–the comic, but Keatinge waits to do the reveal. It’s adult stuff and Xoo isn’t an adult, even if she’s got lots of responsibilities. She’s at the mercy of the state.

The state brings Xoo’s uncle in as a temporary with option to permanent guardian and care-giver. There’s not a lot of time for the uncle Geof and Xoo to bond, the issue’s got to end, Keatinge’s got to do a final surprise as far as tone goes, plus the restaurant needs to open.

There’s a beautiful montage on the last few pages.