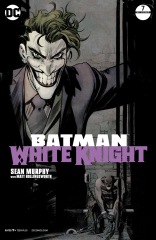 Given where the series goes, I’m not sure he really needed eight issues–this issue seems like the always intended, not drawn out, penultimate issue. There’s a lot going on, a lot of crowded rooms with exposition, a lot of rushed character moments, a handful of revelations. Murphy recenters White Knight on Batman this issue, which almost comes as a surprise. Whether or not it’s successful is going to depend on the finale–Batman makes some hard promises as he gets out of Arkham and teamed with Jack Napier. Murphy’s going to have to keep some of them.

He can’t just have it turn out Thomas Wayne was a secret agent fighting the Nazis. The series’s early success came from Murphy’s willingness to reveal red herrings to be real herrings.

There’s a lot of awesome art–including the “Batman” TV show Batmobile getting some action–but the panels are mostly tiny. Grizzled Batman gets way too many big panels while Murphy’s gorgeous design work gets relegated to little ones. It might be Batman’s comic again, but it doesn’t mean he’s the most interesting thing to see. I mean, Jake Napier’s Jokering out uncontrollably, which Murphy does like a hybrid homage to Bolland and Sienkiewicz. It’s awesome art.

So Batman: White Knight might make it. Not the heights it initially promised, but some significant ones.

It’ll probably make a good trade. It could be a great movie (but not one of those animated ones… and most certainly not a live action one with Ben Affleck and Jared Leto).