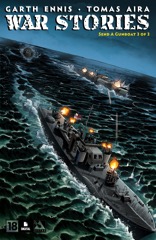 Ennis pushes through to the end of his gunboat arc and it’s a bit of a chore. Aira doesn’t do well with the second half of the issue, which is where there’s all the action. It’s not exciting action; these characters aren’t sympathetic, they’re obnoxious and annoying and intentionally so. It’s so strange to see Ennis go out of his way to make these characters so unlikable. I wish there were some deeper commentary to it and there may be, but it doesn’t come across.

The strangest thing about the issue is Aira’s art. Not the stuff on the boat, which is confusing and there’s a couple panels where the side of a guy’s head disappears, but some of the long shots in the early part of the issue. If it weren’t so poorly computer colored–War Stories and its digital shading for perspective are the pits–and if it were in black and white, there might be something to it. Aira’s shapes, in the distance, have presence.

I wish someone knew what to do with this comic book. It doesn’t seem like anyone–Avatar, Ennis, Aira–have the slightest idea what War Stories should be doing. It’s a shame.