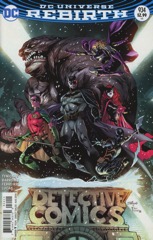 What a nice pilot for a new Detective Comics. Batman and Batwoman are partners–their mission is to train the vigilantes of Gotham to fight some new threat. This threat follows them around with little bat-drones, but Batman can’t figure out they’re still being followed. It’s a team book, but with familiar Bat-family members and a decidedly modern approach. Heavy on the one-liners, heavy on implied action, light on actual content.

Is the problem the art or the story? Well, Eddy Barrows’s art isn’t there but it might be with a better inker. Eber Ferreira doesn’t have a feel for the art. He rounds it, reduces it, instead of emboldening it. Would better art make a significant difference? No. Would great art make a significant difference? Sure. But it’s a monthly superhero book and Barrows delivers it.

So is it the writing? Yeah, sure? Sorry to be so noncommittal but Detective Comics feels pretty noncommittal. Writer James Tynion IV mostly gives everyone sound bites instead of dialogue. Spoiler and Robin have a conversation, Batman and Batwoman, Batman and Clayface, but these are quippy, fast conversations. It’s meant to entertain not tell a story, because Tynion doesn’t have a story to tell.

I suppose Detective Comics is better than I was expecting (though nowhere near what I was hoping for). But it’s just a mediocre superhero book (in desperate need of better editing).