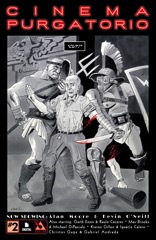 With the exception of Moore and O’Neill’s lead story, this issue of Cinema Purgatorio is shockingly rough. Even Ennis seems to be phoning in his story, which has paramedic Pru meeting up with Frankenstein’s Monster (called Francis) as the NYPD roughs him up. Ennis only has a few pages so he emphasizes the action, which one wishes the other writers in the issue would do as well.

First, the Moore story. I love how Cinema Purgatorio is a comic about how movies suck life away written by Alan Moore, who’s never been particularly interested in turning comics into movies. This issue is a philosophical musing from a couple Romans turned into an existential nightmare. O’Neill has a good time with it. Moore is comfortable with it. It’s a fine open to a problematic comic.

Then it’s Code Pru. Ennis doesn’t put in enough work on the NYPD brutality, but he still has it overshadow the monster aspect of the comic. It feels like he’s doing this one as a favor, it really does. It’s got a lot of Ennis ideas without space to go anywhere. The Caceres art is fine. Again, it’s rushed; Caceres would probably do better with twice as many pages. Ennis would probably need three times as many for all the notions he has going on.

The rest of the book is a writing disaster. The art is all solid, but the writing is a mess.

Gillen’s gamer thing is a bunch of jargon. Calero’s art is technically good, but he doesn’t have any narrative pacing to it. It’s a whirlwind of visuals and dumb dialogue.

Brooks and DiPascale’s Civil War thing is terrible. Clearly Brooks wants to write some kind of Civil War epic so doing it in a comics anthology probably isn’t the right place. It’s all talking. Two installments in and it’s all talking. When you’ve only got eight pages, it’s not enough. DiPascale’s art is okay. It’s the least impressive in a lot of ways, maybe because it so clearly doesn’t look right in black and white.

Then there’s Gage and Andrade’s incredibly boring Pacific Rim knock-off. Only without the monster fights. Instead, there’s a lot of talking about monster fights. Andrade’s art is fantastic but it’s a complete waste of his time. There’s nothing for him to draw.

Cinema Purgatorio having a significant sophomore slump wasn’t something I would’ve expected. Hopefully it turns around. Or Moore and Avatar find writers who know how to write stories in six or eight page installments.