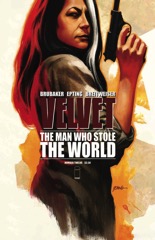 Steve Epting is an action artist. It’s what he does, it’s what makes him special. He’s able to do fantastic comic book action, where he makes the reasonable fantastical and the fantastical reasonable. It’s a perfect thing for Velvet, which is a glossy spy thriller set in the seventies after all. The comic’s setting isn’t just good for Velvet as a character, it’s good because it gives Epting so many possibilities.

So when this issue is literally nothing but a windup for a hard cliffhanger promising a big action sequence? Well, it’s not exactly the best use of time. I suppose Brubaker does get a few expository things done, but they aren’t pressing, and he does give Velvet some great narration, which is great and all, but come on….

Give us the Epting action. Brubaker doesn’t even put it on the menu. He sets the entire thing to simmer. The narrative this issue, its possibilities, it’s not going to boil over. He never even suggests it might. So when it does and he stops the comic? Bad form, man, bad form.

Velvet is an entertaining book. It’s not masterful and it’s got problems, but it’s entertaining and competent and visually glorious.