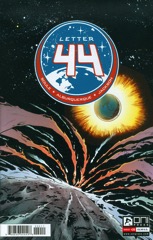 It’s all right. I mean, Soule is still carting the Dubya analogue around–turning him into a Bond villain, which (thanks to Alburquerque’s art) comes off like a cartoon. Not in a good way.

And Soule borrows quite a bit from every sci-fi book and movie where the Earth is faced with imminent disaster. Alburquerque hurts the more visual of those moments. Letter 44 has passed the point where I think about how Soule’s better scenes would play with better art. The last scene, though, the “surprise”–which might get Soule another ten issues out of the comic, which is incredible since this one was pretty solidly ready to go as the penultimate–it would be nice to see it with better art.

The most annoying thing about the issue is how much Soule utilizes his better parts of the comic book, only he doesn’t use them–the characters–he reminds the readers they cared about them. The first lady, whose own story arc was inexplicably flushed, pops up for a visual gag and it all of a sudden makes Letter 44 so much more engaging. It’s mercenary, obvious, but competent. It’s part of the cover price.

Like I said, it’s all right. I’ll complain about Soule writing half a comic with two and a half times too much story, I’ll complain about the art–which never will sync properly with the book–but I’ll be back every issue. Because Letter 44 hasn’t given up, even after the point its clear it isn’t going to hit big or get optioned by Hollywood. It won’t be the zeitgeist, it won’t be a series I go back and reread in ten years. But it’ll be a comic I fondly remember reading when it came out.