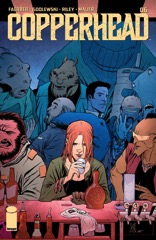 It’s a new arc for Copperhead and Faerber’s off to a strong start.

The story moves ahead a bit–Clara and Boo are partners, Zeke’s got a babysitter and a secret friend in the fugitive android. There’s futuristic action in Western themes, there’s a lot of texture in the joining of sci-fi and Western in Godlewski’s art–Copperhead is working. Even if Godlewski’s full last pages are still a bad idea. Faerber’s attention to character detail is paying off. Even when it’s a gradual buildup, the comic feels worthwhile. Faerber’s not using accrued goodwill to get through this slow, first act issue, he’s still accruing more of it.

All of the elements play well together–female sheriff, Western town, sci-fi elements, single parent. Copperhead is perfectly arranged and it’s nice to see Faerber has a way of continuing the comic. Hopefully for quite some time and many issues.