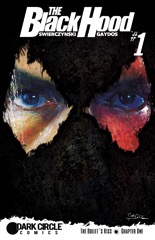 Michael Gaydos is the wrong guy for The Black Hood, just because he’s so perfectly the “right guy” for it. The series is Archie Comics’s attempt to do something knew with their superhero properties (they’ve been trying to do something with them for a couple decades now). Duane Swierczynski writes a tough story, Gaydos does tough art. It’s all realistic, set it modern Philadelphia, very depressing.

So why’s Gaydos wrong? Because he doesn’t bring anything to the comic. Swierczynski doesn’t have an appealing protagonist or a compelling setup–a cop gets injured (and disfigured); he eventually gets hooked on painkillers and then assumes the identity of the Black Hood, a vigilante he himself killed in the incident where he got disfigured.

It’s all so clean it’s pointless. Swierczynski is going through the motions; make this comic tough. Gaydos is doing the same thing.

Whether it’s tough isn’t important at all.