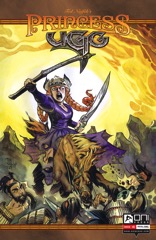 Naifeh unleashes Ülga in battle, which leads to some decent pages, but he doesn’t let her do much fighting. The story keeps getting in the way. There are a lot of plot twists for just one issue–the worst being how her nemesis is nasty to Ülga even when she’s saving the day–and the ending is a little too light.

It’s an amusing issue and has a decent presence, but as the conclusion winds down… it’s clear Naifeh didn’t really have much story to tell. To tell the issue right, he would’ve needed twice the space, maybe three times. There are a lot of little battles and all those plot twists.

He doesn’t seem to like drawing the battle scenes, which is problematic since he’s showing how perfect Ülga is for them. And he gets downright lazy with the art on some of the bad guys.