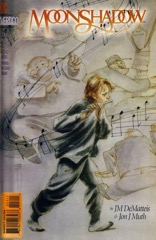 Things get a little too slow this issue, with Moon stuck in an asylum and Ira, his combination sidekick and antagonist, has to break him out. Why? Because Ira needs Moon to work odd jobs to support them. In the meantime, Moon has some encounters with his fellow inmates and there’s a lovely sequence when he plays the flute for them.

Muth’s art for that sequence is gorgeous. It flows, which is sort of strange, since the second half of the issue has a lot of action and a lot of examples of Muth not flowing. He does straight action scenes, very realistic painted panels. They’re technically good, but a little too static. It doesn’t help DeMatteis’s script kind of runs around in a circle too.

If there had been something along the way, something significant for Moon, it would’ve worked out a whole lot better. Instead, it’s gorgeous, troubled.