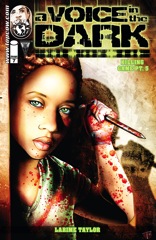 Taylor finishes up the arc and he doesn’t shy away from the murders. He’s still working in the severely layered timeline–going back and rereading the arc and understanding how the past and present move through would probably be an interesting experience. I’m sure it reads a little different.

The issue is mostly methodical, with the protagonist going through her plans and then the actual murders she commits. Taylor’s again great at keeping judgment out of the tone, even when the protagonist questions herself. She’s a likable serial killer (and these are bad people).

Only Taylor never goes into the future. The entire five part arc, the contemporary stuff, it ends with the protagonist’s success. There’s a hard cliffhanger to build anticipation but it’s on the boring “other serial killers” subplot. There’s nothing with Zoey’s life outside being an avenging angel serial killer.

Still, it’s a satisfactory finish to the arc.