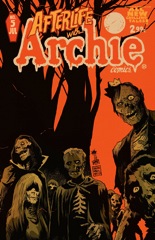 Aguirre-Sacasa and Francavilla take their impossible series and finish the first arc and it’s glorious. Aguirre-Sacasa tells it from the butler’s point of view, which gives the issue a very proper, classical adventure narration. He’s journaling. It’s good to have journaling butlers.

Some of the issue is spent covering what the supporting cast is doing–how they’re reacting to being under siege from zombies and so on. All of these scenes are fantastic and deeply layered. I love how Aguirre-Sacasa is able to get such depth out of his implications. It puts Afterlife on a higher level.

But it’s not just catching up, there’s also a big momentous event and the way it works with all the characters, and the narration figuring in, is simply masterful.

As for Francavilla, he doesn’t get to do recognizable characters as zombies much this issue. Instead, it’s raw human desperation.