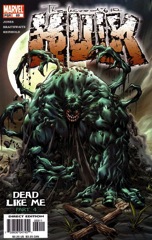 After spending the first third of the book setting up the best Hulk fight since he’s been on the run–the way Jones paces out the banter between Hulk and evil spider-clone Hulk (don’t ask) is perfect–Jones trashes the whole thing. He goes back to his talking heads model. Down to no one really having anything to say to one another.

There’s an awkward lack of ambition to those scenes. Doc, Betty and Nadia’s lives are wrought with angst and Jones goes for easy bickering. Not even inventive easy bickering, just page-filling easy bickering. He comes up with a mystery and has to do everything in service of it. The mystery isn’t a good one and he handles it poorly.

The lack of ambition isn’t just lazy dialogue, it’s much worse–it’s Bruce Banner. He’s a marionette. Jones has stopped implying he has any depth. Hulk’s the only interesting thing about him.