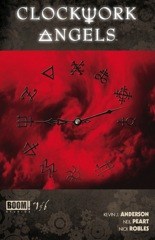 Ah, a young man, unhappy with the life predetermined for him, sets out on his own to find adventure but instead makes discovers to shake the foundation of his understanding. Never been done before.

Oh, wait, it has been done before. And it seems like Kevin J. Anderson knows it’s been done before and instead of trying to seem original, tries for charm with Clockwork Angels. On that level, he succeeds.

The art, from Nick Robles, is painted. Robles is decent with figures–most of the dialogue is in dark settings, so painted doesn’t hurt too much–but he does really well with the scenery. Angels takes place in a mechanized steampunk-type reality, only without the grim. It’s idyllic.