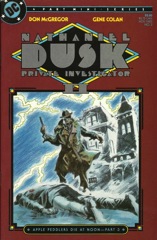 McGregor gets to a lot of revelations this issue. Well, more like two. But they’re big ones. One involves the case, one involves Dusk’s involvement with his dead girlfriend’s kids. The case one is particularly interesting because McGregor does it without much emotion. McGregor isn’t unenthusiastic, he’s just measured–both for the comic (it’s not the big reveal) and for the character. This type of thing isn’t something to get Dusk emotional. He’s disconnected from it.

However, there’s one plot point full of emotion for Dusk and McGregor does explore that point much more thoroughly. McGregor gets a lot of mileage out of the hard boiled private investigator thing. He never throws too many contrary details in, just enough to make the character compelling.

This issue, very gently, even brings attention to New York density versus something like L.A. openness.

It’s a fantastic issue. McGregor and Colan do great work.