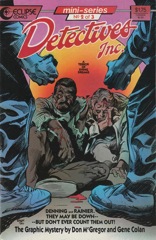 The fight scene is painful. It goes on for three or four pages–at least, two, anyway–and is impossible to comprehend thanks to Colan only doing pencils. It’s like a sketch of a fight scene, not an actual realized sequence.

There’s some good art, of course. Colan isn’t going to do a comic without some good art in it. Most of the good art is for the establishing pages at the beginning of each chapter–there are three or four this issue. More than two. Colan takes his time with the scenery. His pencils are less rough too. There are definite lines.

As for the story, again the best part is when Denning is off on his date. It’s a very awkward romantic sequence, not too graphic, but trying very hard to be suggestive. McGregor’s writing an honest scene though. The rest of the issue feels perfunctory in comparison.