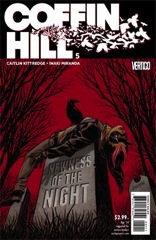 With the aid of Photoshop, Miranda takes Coffin Hill’s art down worse than anything in the script could save. Of course, Kittredge doesn’t have a good script so there’s no hope anyway. The way Kittredge is developing the story–Eve versus a hidden witch, fighting for the attentions of the one good looking guy in town–there’s probably no hope for the series either.

The plotting is bad. The art’s occasionally terrible (Vertigo never would have put out a book with such weak art a few years ago), but it’s occasionally just plain mediocre too. Kittredge’s plotting is continuously bad this issue. The flashbacks are the worst. Kittredge uses them to avoid having to move forward with her actual story.

The ending, which is supposed to be a big detective scene, is the worst. Kittredge can’t write it, Miranda can’t draw it.