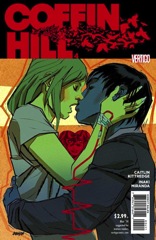 Somehow it manages to slide further downhill and redeem itself simultaneously. Kittredge has a cool cliffhanger. As much as the issue flops–Eve’s now a completely lame protagonist–the cliffhanger makes decent promises. So instead of giving up on Coffin Hill, I’m back for another.

But Kittredge can introduce new characters and they can be compelling. For half an issue anyway.

As for Miranda, the art is definitely continuing its slide as well… but without any to save it. There’s lots of weak composition, there’s almost no detail to characters; this comic is not nice looking at all.