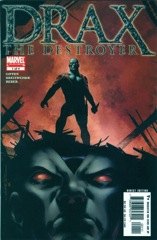 There’s so much sci-fi mumbo jumbo in this issue. So, so much. The first five pages or so are just Keith Giffen writing sci-fi babble for his alien characters. Then the comic starts. The sci-fi babble comes back a little later, but the comic’s strong enough it doesn’t annoy.

It’s a great setup. An intergalactic prison ship crashes on Earth (in Alaska). Will the surviving aliens come across the precious teenagers from the nearby town and will it be trouble? Of course. But Giffen writes the characters well–there’s the tough girl and the dorky guy. And the stuff with the aliens bickering… Giffen does fine with it too.

Where Drax has problems is the art. Mitch Breitweiser has a lot of problems keeping the figures consistent, not to mention the dimensions of heads. Lots of problems there. And the action’s not great.

But the writing’s strong.