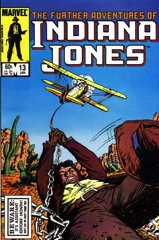 What a difference a penciller makes… Ricardo Villamonte really doesn’t cut it. Indy’s always got a befuddled look.

Still, Villamonte isn’t responsible for the lame story. Michelinie send Indy out west on a field trip from the university. He and his students are on a dig, he runs awful bad guys. The plot contrivances are lame for even a done-in-one licensed comic; Michelinie wastes all his opportunities.

Michelinie opens with Indy’s female students talking about him being cute. One might think the issue would explore his professional life… But, no, it turns into this boring desert investigation thing with a truly silly explanation.

The comic actually shows the most life when Indy’s on the phone talking with the regular cast. Michelinie tried something new and it clearly didn’t work so much he had to remind the reader it’s not the norm.

It’s too bad, he usually does fine.