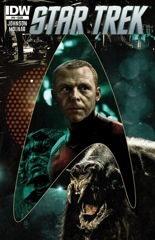 These little original issues don’t work out bad at all. Johnson uses this one to flesh out the Keesner character–Scotty’s little alien sidekick–and it’s pretty good.

Turns out the character is from some planet of little aliens where he’s ostracized for being too tall. He ends up in Starfleet–following an odd cameo from Kirk’s father–and Johnson tracks his career until he meets up with Scotty.

The stuff without Scotty is the best, because with Scotty around, Johnson has to focus too much attention on him. He can’t make Scotty too big a jerk. When it’s just Keesner, it’s an interesting enough look at life in Starfleet from an unusual perspective.

And the issue needs another page or so. The ending is truncated.

Molnar’s art is okay. He doesn’t do too well in the close-ups of Keesner, but does all right everywhere else.