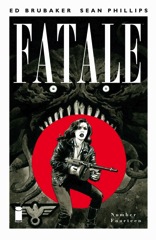 This one starts a lot better than it finishes. Brubaker sets it during World War II, with Jo getting mixed up with Nazis but these Nazis are really the squid man and his sidekicks. Meanwhile an American soldier sees all these strange things happening and finds himself unintentionally rescuing Jo.

I think the opening is homage to The Keep; I presume the book, but maybe the movie, who knows… But the end feels like Guillermo del Toro’s take on Indiana Jones. It’s this lame, lengthy action sequence. Phillips can draw it, but he’s got no heart in it.

The comic’s easily at its best before Jo even shows up. There’s not a lot of character development on the other cast, so Jo should be the best thing in it. But Brubaker’s forcing her into a predictable comic. It’s almost amateurish.

It’s an okay comic, but not anywhere near Brubaker’s par.