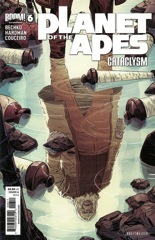 As far as expansive mythology goes, Planet of the Apes doesn’t have much. The standards repeat themselves very quickly. But Beckho and Hardman manage to repeat one of those very same standards and hide it all until the final reveal. They raise all sorts of other possibilities–this issue of Cataclysm, almost against itself, has a lot of adventure to it–and then reveal something extremely logical.

The writers keep their three way split. Zaius gets his own subplot (having his wife school him is awesome), Zira gets her own and then Cornelius–with Dr. Milo along–gets a third. There’s also Zaius’s son, who figures into the Cornelius plot; he’s not a lead, but he’s close.

The only real problem is an art one and penciller Damian Couceiro–with Mariano Taibo ably inking–can’t fix. The chimps look alike. I kept confusing Cornelius and Milo.