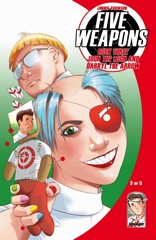 Robinson doubles back quite a bit here–the lead (who he’s still calling Tyler, which might be a mislead, might really be the kid’s name) now has to face off against another of the weapon clubs. Only in the previous issue, Robinson established he’d somehow bested the other clubs… just not in a way worth showing.

Here he takes on the archery club. As usual, Robinson saves the big resolution for the next issue. He still has his pacing magic–this issue opens with the fight scene for Tyler beating the staff club, then moves into everything else, but Robinson has now raised more questions than are worth having open.

For example, why’s the principal out to get Tyler? Robinson can only keep so many subplots in the air at once. He’s starting to fumble them.